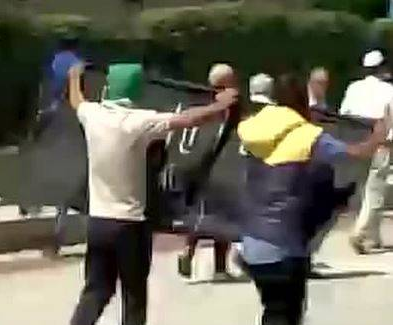 Srinagar:Â In a development that may raise an alarm in the security establishment, flags of dreaded terror outfit ISIS along with those ofÂ PakistanÂ were today raised in Kashmir after which police promised a thorough probe and legal action against those involved.Â

A group of youth, with faces covered, carried a black banner resembling Islamic State flag as they marched from Jamia Masjid towards Nowhatta chowk in downtownÂ SrinagarÂ soon after the Friday prayers, official sources said.Â

They said Pakistani flags were also waved by some youth in the area before police swung into action and chased away the protestors. No arrests have been made so far.Â

Hardline Hurriyat Conference headed by Syed Ali Shah Geelani had called for protests after Friday prayers against the killing of Tehreek-e-Hurriyat activist Altaf Sheikh by unidentified gunmen on Tuesday.Â

Reports from Kupwara in north Kashmir said Pakistani flags were hoisted at some places there too after the Friday prayers, the sources said.Â

Violent protests were also reported from Sopore town and some other areas of Baramulla district leading to clashes with law enforcing agencies, the sources said. However, there were no reports of anyone getting hurt in the clashes.Â

Commenting on the hoisting of controversial flags including that of ISIS and Pakistan, state police chief K Rajendra Kumar said, “We are taking note of every thing and will fully investigate such incidents. We will take legal action against all those involved.”Â

He said last year also, “there were certain instances of such flags. We identified the people behind the incidents and arrested them.”Â

Asked about the probe into the killing of the Hurriyat activist and attacks on telecom service providers in Sopore township, he said police has identified the perpetrators and efforts are on to nab them.Â

“We have got the leads and have identified those involved. We are on the job and action will be taken against them,” he said.Â

On the emergence of Tehreek-e-Taliban posters in Kashmir, Kumar said the matter is under investigation and nothing can be said till the probe is over.