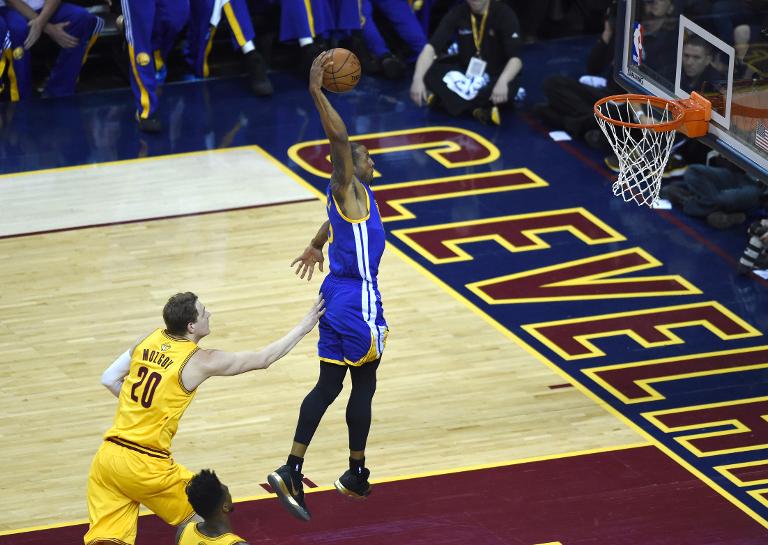 Golden State forward Andre Iguodala had been consigned to a reserve role for 100 games during the season and playoffs, but he made his first start a memorable one Thursday.

The 31-year-old playmaker scored 22 points, grabbed eight rebounds and played aggressive defense against Cleveland star LeBron James in a 103-82 triumph that pulled the Warriors level at 2-2 in the best-of-seven NBA Finals.

“He looks great out there,” Warriors coach Steve Kerr said. “He has been our best player through four games. He guards LeBron pretty much every possession he’s out there and his offense has been terrific.”

Iguodala, whose willingness to sacrifice his starting role for key minutes coming off the bench set a tone for the Warriors season, replaced Andrew Bogut in the starting lineup so Golden State could try and create a fast early tempo after a series of slow starts.

“He has been phenomenal for us,” said Golden State’s Draymond Green.

“He has been that steady force in every game in this series for us. Inserting him into the starting lineup, he’s already being aggressive. He’s already confident but it brought pace to the game. He was knocking down shots. He was all over the floor, getting deflections, coming up with loose balls, with rebounds and pushing the tempo and that really helped us a lot.”

Iguodala had nine points in the first quarter and hit 8-of-15 shots for the game, including 4-of-9 3-point tries.

That even had four-time NBA Most Valuable Player James impressed.

“He’s one of the X-factors and he came to play,” James said. “He shot the ball extremely well. He was in attack. He got a couple of dunks in transition early on which got him going and he was really good. To start him gave them that boost.”

Iguodala was determined to make matters more difficult on James all night and wear him down, something that happened at the end of the third quarter and allowed Golden State to start a decisive run while he rested.

“The thing that makes him dynamic is he’s probably one of the smartest and best passers out of all the scorers,” Iguodala said about James.

“But the foundation is the same — make him work as hard as possible, make him take tough shots. You look at his strengths, his weaknesses, which way he wants to go, which way he prefers to play, and you try to just take him out of his comfort zone.”

Warriors leader and NBA Most Valuable Player Steph Curry said that while he is always confident in his shot making, Iguodala’s defensive work was critical.

“We know his knack for just being impactful on the defensive end, whether it’s playing one-on-one defense, getting steals, rebounds, blocking shots, he does it all,” Curry said.

“It showed tonight and a huge reason why we’re 2-2 going home.”

Kerr lied to reporters before the game, saying he was not changing his starting lineup, and made no apologies for it.

“If I tell the truth it’s the equivalent of me knocking on (Cleveland coach) Dave Blatt’s door and saying, ‘Hey, this is what we’re going to do,'” Kerr said.

“I could evade the question, which would start this Twitter phenomenon — who is going to start for the Warriors — or I could lie.

“So I lied. Sorry but I don’t think they hand you the trophy based on morality. They give it to you if you win.”