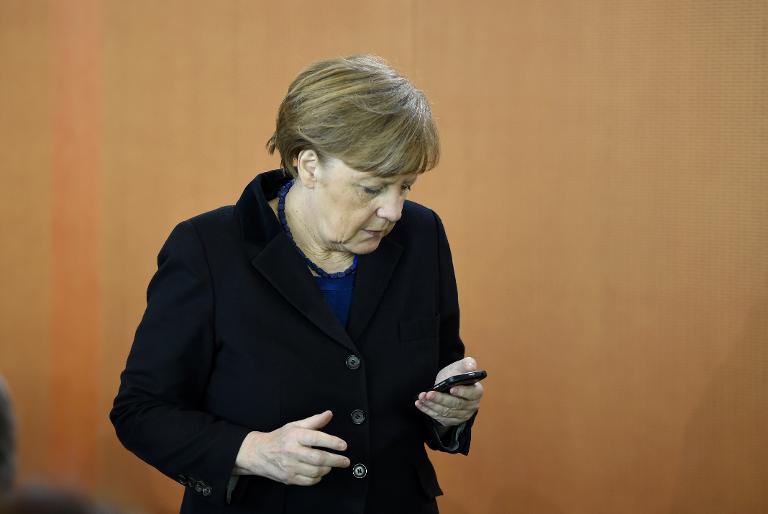 Germany’s chief prosecutor has dropped a probe into the alleged tapping of Chancellor Angela Merkel’s mobile phone by US intelligence agencies, his office said Friday.

The German chief prosecutor Harald Range said he had put an end to his year-old probe, citing a lack of hard evidence that would stand up in a court of law.

“The Chief Federal Prosecutor has closed the investigation over suspected spying on a mobile phone used by the chancellor by US intelligence services … because the allegation cannot be proven in a legally sound way under criminal law,” a statement said.

Media reports in October 2013 said that the NSA had tapped Merkel’s mobile phone — a claim Washington appeared to confirm later when US officials said the cellphone was no longer a target.

The German prosecutor’s office on Friday said that the “vague” US comments did not legally amount to proof of past spying activity.

“The vague statements made by leaders of the United States of America on a possible monitoring of mobile telecommunications of the chancellor by a US intelligence service (‘not any more’) are not sufficient for a description of the activities,” the statement said.

“The remarks, which were interpreted by the public as a general admission of guilt, do not absolve (prosecutors) from gathering solid evidence in line with the requirements of the criminal code.”

The statement also said that “the documents published by the media so far, derived from Edward Snowden, contain no solid legal evidence of monitoring of the chancellor’s mobile phone”.

Merkel’s spokesman Steffen Seibert would not comment directly on the prosecutor’s decision but insisted that “it was never about her mobile phone, it was about all citizens”.

The NSA affair had highlighted “disagreements we have with partners about how to keep the balance between the need for security and the protection of private data”, he told a press conference.

The NSA spy claims had led to the most strained US-German relations since the 2003 US invasion of Iraq. In July 2014, after two more cases of suspected US spying emerged, Berlin expelled the CIA station chief.

Early this year, however, media reports charged that Germany was not just a victim, but that its BND foreign intelligence service has helped the NSA spy on targets such as the French government, European Commission and Airbus Group.

Airbus filed a criminal complaint against persons unknown and several European governments said they were investigating the claims.

Merkel has repeatedly defended the need for German intelligence to cooperate with its US counterparts to combat terror threats.

At a G7 summit in Germany last weekend, Merkel and Obama met for a Bavarian-style breakfast, complete with pretzels, beer and oompah music, to drive home the enduring strength of transatlantic ties.

Merkel described the United States as Germany’s “friend and essential partner” despite their occasional “differences of opinion”.

Data privacy is a sensitive subject for Germans, haunted by historic surveillance by the Nazis and ex-communist Stasi secret police.

Parliamentary panels are investigating both the Snowden revelations and the more recent NSA-BND scandal, demanding the release of a list of the search terms used in surveillance activities — a request Merkel’s government has rejected so far.

The prosecutor meanwhile said that “the possible massive collection of the telecommunications data of the German population by British and US intelligence services remains under observation”.