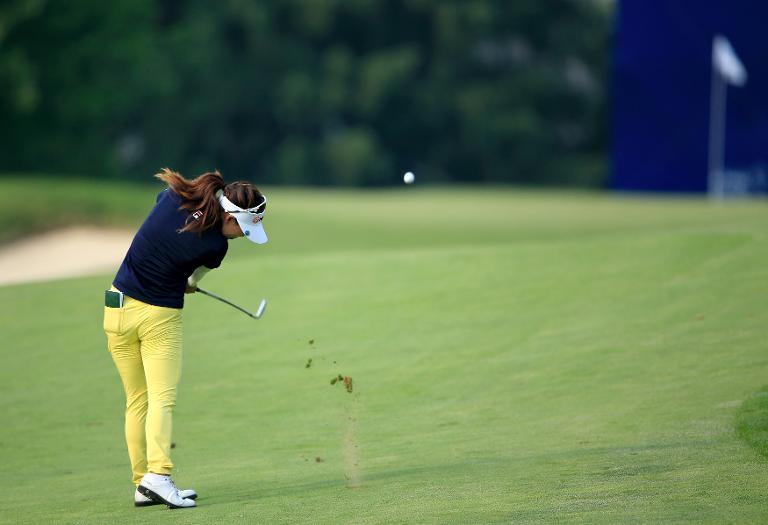 South Korea’s Jenny Shin fired five birdies and an eagle in a seven-under-par 66 on Thursday to grab a one-shot first-round lead in the Women’s PGA Championship, the second major of the LPGA season.

Canadian 17-year-old Brooke Henderson was alone in second on 67, a bogey at her final hole — the par-five ninth — the only blemish on a card that included five birdies and an eagle.

Like Henderson, Webb — more than twice her age at 40 — also teed off on 10 on the par-73 Westchester Country Club course and moved as low as six-under before her only bogey of the day at the par-four seventh.

It was a further stroke back to France’s Karine Icher and China’s Feng Simin on 69.

Shin, whose best LPGA tour finish was a tie for second in the 2012 HSBC Women’s Champions, posted her lowest round in a major by two strokes.

As she often does, Shin was keeping her eye on the scoreboard throughout her round.

“I was chasing the leaderboard all day and I was surprised that Webby was at six (under) at one point, I thought how is she shooting six-under par,” Shin said.

That birdie at the last followed her eagle at the par-five 15th.

Henderson, who turned pro in December, made the most of her sponsor’s exemption with a round that included an eagle at the par-five 12th, where her seven-wood from 204 yards out landed three feet from the pin.

A total of 39 golfers were within five shots of Shin’s lead.

South Korean Park In-Bee, the two-time defending champion of the tournament formerly known as the LPGA Championship, was among another big group on 71.

In addition to seeking a third straight title in the event, Park is closing in on the world number one spot occupied by 18-year-old New Zealander Lydia Ko, who fired a first-round 72.

“I think everybody feels a little pressure because it’s a major tournament and everybody wants to do well,” said Park, who shook off two front-nine bogeys to collect five birdies.

“Because it is a major tournament and this is a great event, that’s why we feel the pressure. So I’m happy.”