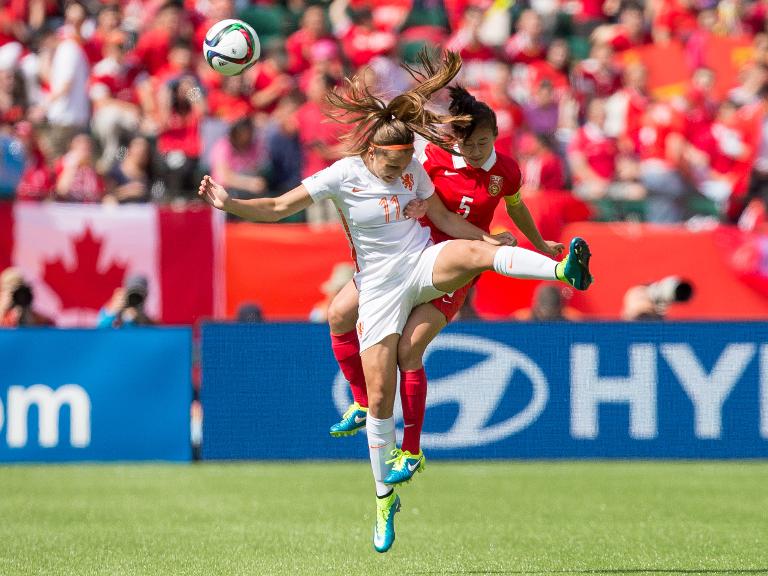 Wang Lisi’s late winner got China’s Women’s World Cup campaign back on track as Germany were held 1-1 by Norway and Canada played a goalless draw against New Zealand.

China’s Group A tie in Edmonton’s Commonwealth Stadium looked to be heading for frustration before Wang broke through to roll the ball past Sari Van Veenendaal in the Dutch goal one minute into extra time.

It gave the ‘Steel Roses’ a vital three points after losing their opening match to Canada, who had to settle for a goalless draw against New Zealand.

Canada remain top of Group A with four points from two games, ahead of China and the Netherlands, who have three. New Zealand are bottom of the group with one point.

“I think they did an excellent job today. We could have scored more and been more efficient,” said China coach Hao Wei.

“In the beginning I said Group A was very even, all teams are similar in their strengths so I wish we could have scored more,” added the Chinese coach.

In Group B ties over in Ottawa, a second half Maren Mjelde equaliser grabbed a 1-1 draw for Norway against top ranked Germany in a clash of former champions.

Anja Mittag had put 2003 and 2007 champions Germany ahead after just six minutes with her fourth goal following her hat-trick in their opening 10-0 whipping of Ivory Coast.

But midfielder Mjelde equalised for 1995 winners Norway with a stunning free kick past former world player of the year Nadine Angerer in the Germany goal after 61 minutes.

The Germans next play Thailand who came from a goal down to keep their hopes of advancing alive with a 3-2 win over fellow newcomers Ivory Coast.

“We are very lucky, because even though we had less attacking chances, we got our first victory in our country’s history,” said Thailand coach Nuengrutai Srathongvian.

“We are honoured to be playing the best team in the world Germany in our next match and will do our absolute best to win.”

Ivorian striker Ange Nguessan had given the African side the lead after four minutes but Thailand hit back with three unanswered goals.

A double from Orathai Srimanee after 26 and 45+3 minutes, and a Thanatta Chawong effort on 75 saw the Asian side bounce back from a 4-0 loss to Norway in their opener.

Josee Nahi got one back for the Ivory Coast two minutes from time, but it was too little for the African side with just one game remaining.

“It’s a sad night for us and for the people of Ivory Coast,” said Clementine Toure of the lowest ranked side in the tournament at 67.

Germany coach Silvia Neid admitted her side had nearly paid heavily for letting their guard down after dominating early against the 11th-ranked Scandinavians.

“We just didn’t play as well in the second half – and then Norway gained hope,” said Neid.

The result leaves Germany and Norway topping Group B with four points. Thailand are third with three points with Ivory Coast bottom with none.

“The end result was fair, but we were lucky – (Germany) could have killed this game in the first half,” said Norway coach Even Pellerud.

In the final round of group games on Monday, Germany play Thailand in Winnipeg and Norway take on the Ivory Coast in Moncton.

Champions Japan and the United States will play their second round matches on Friday.

Japan come up against Cameroon in Group C in Vancouver, with group rivals Switzerland up against Ecuador.

The United States play Sweden in Group D in Winnipeg, with Australia up against African champions Nigeria.