Home Politics AAP to show the door to Tomar? 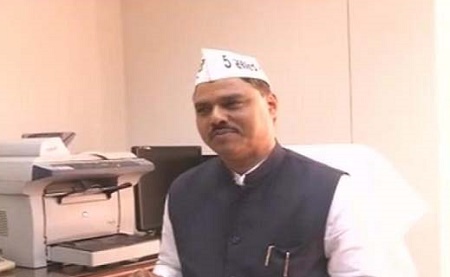 New Delhi:Â With its image taking a severe beating, AAP is contemplating to sack Jitender Singh Tomar as Chief Minister Arvind Kejriwal is understood to be very “upset” over the entire fracas involving the former’s allegedly fake academic degrees.

Two senior party leaders indicated that the former Delhi Law Minister could face expulsion from AAP as there was a feeling in the top echelons that he had “misled” them on the issue.

“We have zero tolerance on such issues. He was given a fair opportunity but the general feeling is that he tried to mislead the party. There’s a possibility of his expulsion from the party,” a senior leader said.

The party leaders said that the issue has been referred to the AAP’s internal Lokpal and action would be take after the body submits its report.

“Arvind (Kejriwal) is very upset. He (Tomar) was given a fair opportunity. He produced certain documents and RTIs and tried convincing everybody. But then you cannot keep lying,” the leader added.

Party sources said when the issue of his graduation degree cropped up, AAP also found out that the matter was a bit “fishy”.

“When we asked him to come clean on the whole issue, he said it was a political conspiracy against him. We saw his degrees and it appeared to be genuine. We also gave him the benefit of doubt.

“Now the issue of his graduation degree has cropped up. We have also got information from different sources about his degree. This has landed the party in a soup,” said another senior party leader.

There were also reports that the party has withdrawn the services of its legal cell head HS Phoolka as Tomar’s lawyer but it could not be immediately confirmed as the former is in London.

49-year-old Tomar, MLA from Delhi’s Trinagar constituency and a first-time minister, was remanded in four-day police custody by a Delhi court on Tuesday.