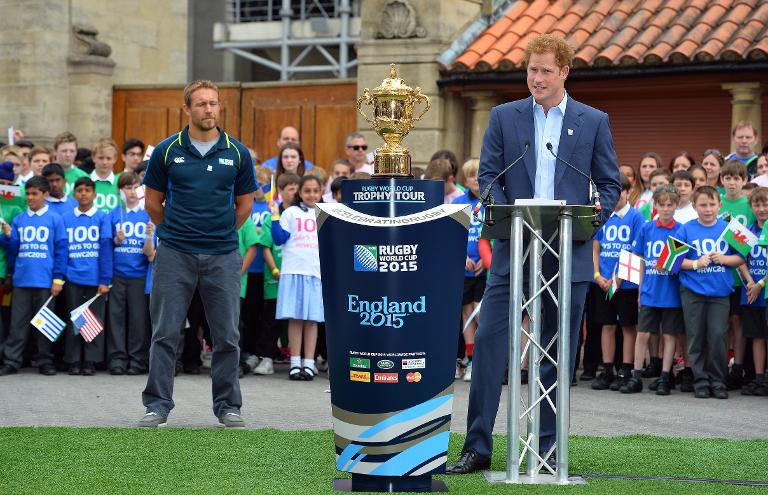 RFU chief executive Ian Ritchie predicts the Rugby World Cup can help put the “feelgood factor” back in global sport following the corruption scandal that has rocked the world of football.

The trophy will be taken to different venues and events around the UK and Ireland but Ritchie was focused more on the potential uplift and boost the tournament can give on the international stage in the wake of the damaging controversy engulfing Sepp Blatter and others at FIFA.

The RFU boast that England 2015 will be the biggest and best World Cup so far with over two million tickets already sold, and Ritchie insisted: “This event has the capability, and certainly the delivery, to be a fantastic feel good tournament. It has all the haulmarks on and off the pitch of something which will be very special.

“I don’t want to go into detail about what is happening with FIFA and the footballing world but I can assure you that world rugby is in a very good place and England 2015 is well on track to be a very memorable experience and spectacle.

“The way this country engages with sport, whether it’s the Olympics or whether it’s back to other major events plus the interest we have seen up to now, is going to be significant.

“There are always challenges in events of this size and scale but this can be a great showcase for rugby. The economics of this event are certainly in a very good place and we will do our bit to invest in the growth of the world game once the tournament is over.”

Ritchie was just as swift to deny the England squad with the likes of hooker Dylan Hartley and centre Manu Tuilagi having to be dumped from Stuart Lancaster’s World Cup plans for on and off the field disciplinary problems could be in danger of a repeat meltdown of the one that ripped them apart in New Zealand four years ago.

Giving Lancaster his full support of his strict handling of the two matters, Ritchie claimed: “Those events were sad but it isn’t endemic in any shape or form. It is not a situation where we have any issues with the culture. And you look at what has happened under Stuart over the last three years.

“The engagement with the country, especially here at Twickenham has been outstanding during that time and the fans come here knowing the players are doing everything they can to succeed. So I don’t think we have an image problem at all.

“I have no doubts about the culture, the discipline and the way the squad will deal with all the pressures which will be significant over the next few months.

“I don’t think you can afford to be prissy about it. There have to be values and standards of behaviour. It’s team sport after all.”

He added: “There is a cohesion about this squad and once they get into camp they will fully understand that clear mission and focus which is to make sure we deliver on the pitch during the World Cup. Will we win it? It’s going to be a very hard job but we will give it everything we can.”

Speaking to launch the trophy tour, Prince Harry echoed those views when he said:

He added: “I’m sure the whole of England and Wales will get behind this incredible sporting event and make it one of the best ever.

“I am sure they will give every visitor from all the different nations from around the world a truly warm and friendly welcome. It promises to be an occasion those who witness it will never forget.”