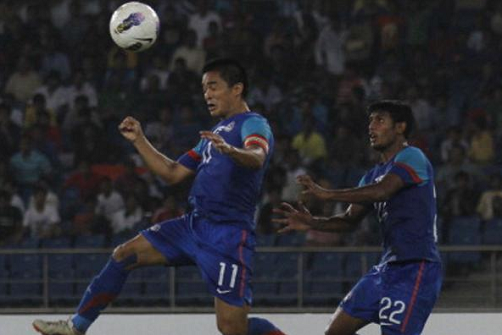 Bengaluru: An inexperienced Indian football side gave a good fight before going down 1-2 against Oman in the home leg match of the 2018 World Cup Preliminary Qualification round in Bengaluru on Thursday.

Oman, ranked 40 places above India in the FIFA chart at 101, scored through Qasim Said (first minute) and Imad Al Hosani (40th, penalty) while Sunil Chhetri was on target for India with a superb goal in the 26th minute.

The 19,000-odd crowd at the Kanteerava Stadium thought that India had equalised in the 69th minute but to their dismay, the linesman ruled that Robin was offside.

C K Vineeth essayed a cross from the right towards Oman goal and defender Sallam Amur flicked the ball into his own net but the linesman thought that Robin was in off-side position before that.

India coach Stephen Constantine gave debut to four players, including three in the back four, and the inexperienced showed as the home side were in the backfoot from the beginning by conceding a goal in the first minute.

Then, a debutant Dhanachandra Singh went for a reckless challenge on an Oman attacker to concede the decisive penalty.

In fact, the most experienced Indian players after the duo of Sunil Chhetri and goalkeeper Subrata Paul, who each have played more than 50 international matches, were captain Arnab Mondal and Robin Singh — who each have donned India colours in 10-odd matches.

The fancied Oman dominated the match throughout with several shots at the Indian goal while the home side had just a couple of goal-bound attempts. The Indian backline were under severe pressure trying to fend incessant Oman attackers and the home side were lucky not to have lost the match by a bigger margin largely due to poor finishing by visiting team.

It did not take long for Oman to take the lead as Qasim Said put them ahead in less than 30 seconds into the match from the first goal-bound attack.