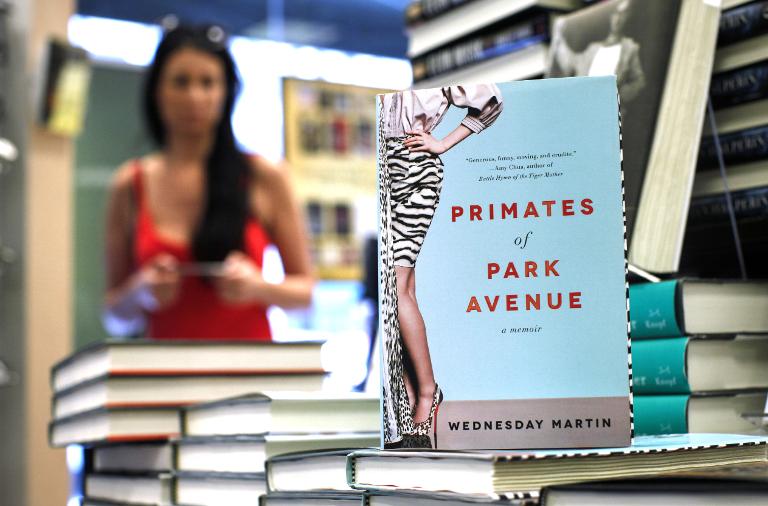 It’s a mommy memoir causing a rumpus in New York: how pill-popping, wine-quaffing, uber-rich mothers on Manhattan’s Upper East Side get year-end bonuses from their husbands and hire tutors for toddlers.

“Primates of Park Avenue” is the latest in a long line of books devoted to the unimaginable wealth of the one percent in a city where some estimate that more than 20 percent of children live in homes without enough to eat.

Author Wednesday Martin seeks to distinguish the book from the jungle of other literature about extravagant excesses by mixing anecdote with anthropology.

The blonde mother of two with a husband in finance peppers her eyebrow-raising assertions with observations made by the English primatologist Jane Goodall in her study of chimpanzees in Tanzania.

She equates her quest to acquire an ultra-exclusive Hermes “Birkin” handbag — which can sell for $150,000 or more — to a chimp seeking to show strength in the wild.

Martin details gender segregation at dinner parties, where men and women sit at separate tables, and portrays women as “Manhattan geishas” who sculpt their bodies and beauty to the extreme.

Thin and anxious, mommies self-medicate with wine — served at playdates, even as early as 11 am — and prescription drugs.

She feigns horror in discovering her son has the wrong birthday in a culture of “redshirting” — timing pregnancies so children are born in the autumn, so they are the oldest, and presumably the most intellectually developed, in their age group.

Reviews of the book — presented as an “anthropological memoir” — have been decidedly mixed.

The New York Post fact-checked the book and alleged that it was “full of lies,” among others that Martin had lived on the Upper East Side for three years with one child, not six years with two children.

Neither was she pregnant and confined to bed rest, dressed in pearls and a jacket when being interviewed for a condo, as the book said.

Martin and publishers Simon and Schuster have stood by the book, but say future copies will come with an author’s note to explain that some names, characteristics and chronologies had been changed.

Cary Goldstein, executive director of publicity at Simon and Schuster, said that such notes were “totally customary” for memoirs.

“The author has not lied. There isn’t a movement or backlash against Wednesday Martin,” Goldstein told AFP.

The brouhaha has certainly been good for sales. Released on June 2, it is already number one on Amazon’s list of best-selling memoirs.

“The book is doing very well,” Goldstein said. The publishers are in the sixth printing run, with 63,000 copies produced.

An essay written by Martin introducing the book is the third most emailed article on The New York Times website in the last 30 days.

“Many people are fascinated and some people may have been appalled by the lifestyles of the very wealthy. People live vicariously or they live in judgment,” Goldstein said.

What is clear is that the slim tome about New York’s wealthiest zip code has sparked fury, bafflement and confusion from ladies who have flocked to the papers saying she’s got it all wrong.

“I think it’s an effort to dehumanize these people — it seems to be a divisive book designed to humiliate a group of people,” People magazine quoted an anonymous uptown mom as complaining.

In particular, wealthy women scoff at her much-hyped, passing remark that glam stay-at-home moms get a percentage of their husband’s year-end bonus for looking good and taking care of the kids.

“I don’t know anybody, and I mean anybody, who has something like that written in their pre-nup. And I know a lot of people,” Vanity Fair quoted Upper East Sider Allison Aston as saying.

“It might be happening in extreme cases, but it’s certainly not the norm.”