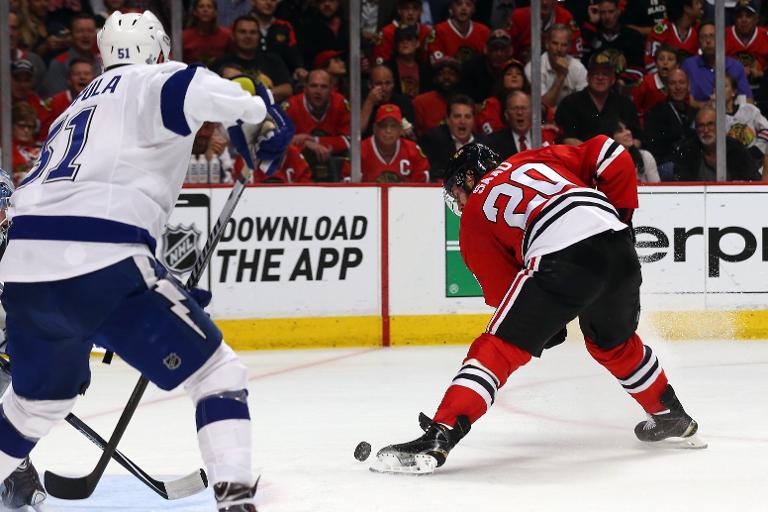 Brandon Saad scored the go-ahead goal and the Chicago Blackhawks made it stand up for a 2-1 victory over the Tampa Bay Lightning that leveled the Stanley Cup final.

Game five is in Tampa on Saturday, when the Blackhawks will try to take another step toward a third championship in six seasons.

Saad gave the Blackhawks a 2-1 lead with 13:38 to play, backhanding a shot under Tampa Bay’s 20-year-old Russian goalie Andrei Vasilevskiy, who was making his first playoff start.

“I was really pretty lucky,” said Saad, who drove the puck up the left side after a faceoff, lost it in front of the net but recovered it to backhand his shot through Vasilevskiy’s pads.

“I just saw space going to the net, tried to drive and create some chaos,” Saad said. “Goalie made a good play with poking the puck, bounced around my feet.

“I finally found it to my stick, just tried to get some wood on it and get to the net and found a way through his legs.”

“He’s dangerous,” Quenneville said of the forward who notched his eighth goal of the 2015 playoffs. “Very good performance.”

Captain Jonathan Toews scored his first goal of the series for Chicago, opening the scoring with 13:20 left in the second period.

Crawford then withstood a bevy of shots in the final minutes, as Tampa Bay pulled Vasilevskiy for an extra attacker.

“I’ll be honest with you, I don’t know how one of those didn’t go in,” Lightning coach Jon Cooper said of his team’s late barrage, which included a point-blank blast from Lightning captain Steven Stamkos and a deflection by Killorn that sailed over the net.

“You can definitely expect their team to come at us hard and press when they are down a goal,” Toews said. “It’s going to get crazy in some moments, and I think we did a good job of handling it.”

Vasilevskiy made 17 saves as he stood in for Ben Bishop, who was scratched with an unspecified injury.

Vasilevskiy, who had relieved Bishop in the Lightning’s game two victory, was able to ease into his first post-season start as the Blackhawks mustered just two shots on goal in the first period.

Cooper said he thought Vasilevskiy did a “hell of a job” in giving up just two goals in a pressure-packed situation.

“We’ve had a lot of success when we’ve only given up two,” Cooper said. “That kid gave us a chance to win the hockey game. We just scored one, we’ve got to score more than that.”

However, Cooper also said that he expected Bishop to play again in the series, although he’s not sure if it will be on Saturday.

“Bish is going to play again in this series, there’s no question,” Cooper said. “I just don’t know which game.”

The one-goal decision was the fourth straight in the series, the first time since the Canadiens’ sweep of the Blues in 1968 that the first four games of a title series were decided by just one goal.