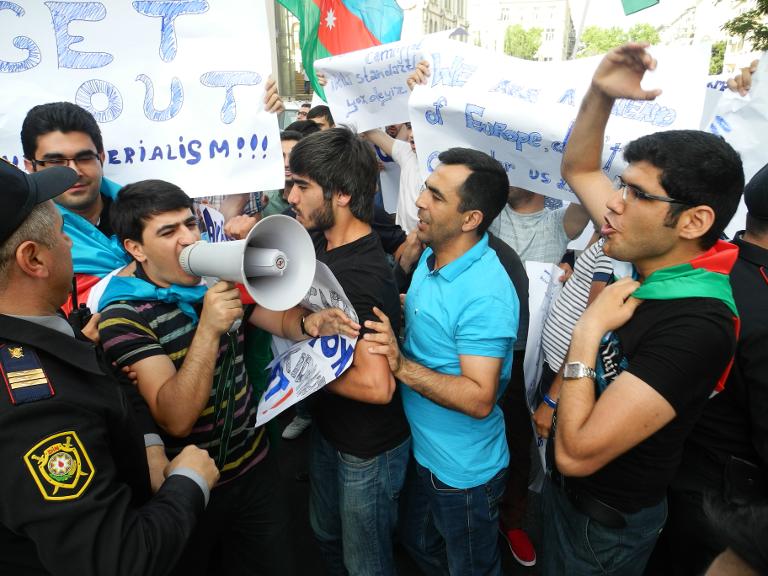 An international row over Azerbaijan’s rights record threatened Thursday to overshadow the opening of the inaugural European Games as Baku lashed out at criticism and foreign journalists said they were blocked from entering the country.

In a further bad sign, three Austrian synchronised swimmers were injured — one seriously — when a shuttle bus hit them.

Energy-rich Azerbaijan has pumped vast resources into hosting the first edition of the European Games sporting extravaganza billed as Europe’s answer to the Olympics from June 12-28, building state-of-the-art facilities in a bid to burnish its image.

But international and local rights activists have hoped that the glitzy event will draw attention to the widespread abuses in the tightly-controlled ex-Soviet country.

The criticism has prompted an angry reaction from President Ilham Aliyev’s government, which dismissed the activists’ claims as a Western-orchestrated smear campaign.

“A platform has emerged in the West which regularly tries to convince everybody that basic rights and democratic principles are not respected in Azerbaijan,” Ali Gasanov, a top advisor to Aliyev, told reporters Thursday.

“Rule of law is being respected in Azerbaijan. All fundamental freedoms and rights are guaranteed. There are no political prisoners in Azerbaijan,” he said.

Government supporters protested outside the offices of the European Union, the Organisation for Security and Cooperation in Europe (OSCE) and the British embassy in Baku, denouncing “an unprecedented and dirty campaign of lies against Azerbaijan”.

Human Rights Watch said that the games “will open… in an atmosphere of government repression unprecedented in the post-Soviet era”.

The OSCE said on Wednesday Azerbaijan ordered it to shut down its local office ahead of the European Games, while Amnesty International complained the country barred it from visiting Baku.

London-based Amnesty had intended to hold a briefing to highlight a crackdown on journalists, opposition members and activists ahead of the sporting event.

The media freedom advocacy group, the Committee to Protect Journalists, issued on Thursday a statement saying “the press has a unique opportunity to scrutinise this censored and restricted country” during the games.

British group Platform said that one of their activists, Emma Hughes, who had been travelling to support political prisoners, was detained on arrival in Azerbaijan and told she was on a “red list” of people who cannot enter the country.

British newspaper The Guardian said the Azerbaijani government has banned it, “along with a number of media outlets and human rights activists, from entering the country to cover the inaugural European Games”.

Radio France International’s Caucasus correspondent Regis Gente told AFP that the authorities refused to explain their decision to deny his visa and accreditation.

The European Court of Human Rights meanwhile ruled against Baku for blocking free elections in a case brought by a candidate who had been excluded in a 2010 poll.

The International Freedom of Expression (IFEX) group urged global media and rights activists to flood the official #Baku2015 hashtag during the European Games “with tweets condemning Azerbaijan’s freedom of expression record and demanding freedom for these unjustly imprisoned defenders of free expression”.

In a move to counter the effort, Azerbaijan’s pro-government APA news agency called on local journalists to launch a Twitter campaign under the same hashtag to deliver “true information”.

Rights groups have long accused Aliyev’s government of using spurious charges to jail critics and say the authorities have stepped up their campaign to stifle opposition after his election to a third term in 2013.

Aliyev, 53, came to power in 2003 following an election seen as flawed by international observers.

He took over after the death of his father Heydar Aliyev, a former KGB officer and communist-era leader who had ruled newly independent Azerbaijan with an iron fist since 1993.

On the sporting front the news was also inauspicious as three Austrian athletes were hospitalised on Thursday after being hit by a bus.

Synchronised swimmer Vanessa Sahinovic, 15, suffered “multiple fractures” and was due to be flown back to Austria “as soon as possible”, the team doctor said.

The two other athletes — some of the rouhgly 6,000 taking part in the Baku event — sustained light injuries.