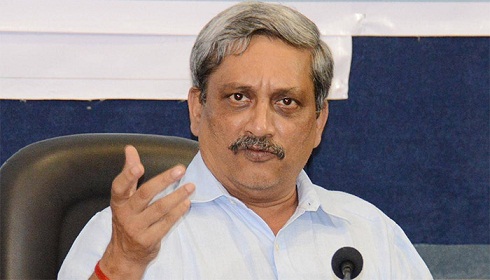 New Delhi: Days after the Indian Army’s surgical strike against insurgents believed to be behind the Manipur ambush, DefenceÂ Minister Manohar ParrikarÂ has said that the action againstÂ insurgencyÂ led to change in mindset.

Taking a swipe at Pakistan, without mentioning it, Parrikar said that “those people who fear India’s new posture are reacting”.Â

Reacting to growing suggestion that India could repeat a Myanmar in Pakistan if the latter does not crack down on terror groups it has patronized, Pakistan on Wednesday warned against any such “misadventure” inside its territory.Â

â€œIndia should not mistake Pakistan for Myanmar and our Army is fully capable of responding to any adventurism,” Pakistan Interior Minister Chaudhry Nisar Ali Khan had reacted on Wednesday.

Pakistan’s reaction came amidst doubts whether India would pursue a similar policy along its western border with Pakistan.

Union minister Rajyavardhan Rathore had on Wednesday celebrated Indian Army’s operation in Myanmar as a message to its neighbours who harbour terrorists.Â

Rathore’s statement, echoed by several of his ministerial colleagues on Wednesday, suggested that such incisions by inimical forces on India’s western borders, or a strong provocation like the 26/11 Mumbai attacks, could witness similar action by the Indian Army.Â

The operation conducted by the Indian Army on Tuesday involved two attacks along the Indo-Myanmar border, with the camps being located in Myanmarese territory.

Perceived as the largest cross-border operation yet by the Indian Army, the attack resulted in several militants being killed with no loss of life on the Indian side.

A statement from the Ministry of Defence said that the operations were necessary in light of intelligence reports, which warned of militants planning attacks on Indian soil. The statement further appreciated the cooperation shared between the armies of India and Myanmar, assuring that any security threat to the nation will be met with a â€˜firm responseâ€™.