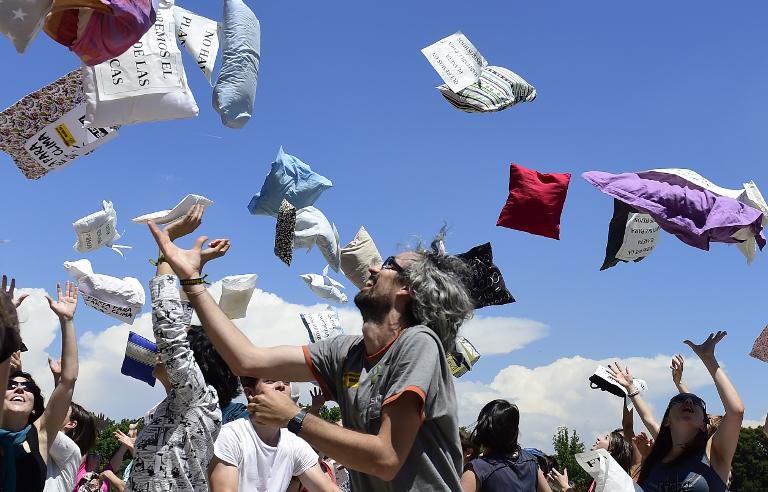 A long round of UN climate talks closes in Bonn Thursday with negotiators grappling for a way out of a textual bog.

Exactly six months are left before 195 countries are meant to forge a post-2020 accord in Paris to lift the shadow of climate change threatening future generations.

But after 10 days, negotiations in Bonn barely advanced in clearing a draft text of a thicket of problems.

The text is now just “five to 10 percent shorter” than at the start of the round when it numbered nearly 90 pages, said observer Romain Benicchio of campaign group Oxfam.

None of the many issues bedevilling the complex process have been agreed, he said.

The draft coalesces around the goal of limiting global warming to two degrees Celsius (3.6 degrees Fahrenheit) over pre-Industrial Revolution levels.

That is a figure scientists say offers a good chance of avoiding catastrophic damage to Earth’s climate system involving a future darkened by drought, flood, storms and rising seas.

The accord will be enacted by voluntary national pledges to curb greenhouse gases — the emissions, mainly from fossil fuels, that are driving the warming phenomenon.

Beyond that, though, wide and politically explosive differences remain.

They include clauses on how to ratchet up pledges, through regular reviews, to ensure Earth is on track for 2 C.

Also undetermined is how rich countries will muster $100 billion (88 billion euros) in climate aid for poor countries by 2020.

Thorny issues such as these will be left to ministers — or heads of state or government if the November 30-December 11 Paris conference is transformed into a summit.

But veterans of the 23-year climate process say this high-stakes poker is only feasible if politicians are handed a manageable text.

Benicchio said it was likely that, on the final day, the talks would seek a faster way to streamline the text.

“They may mandate the (negotiations’) co-chairmen to come up with a draft text that will really work on issues of substance,” he said.

Alternatively, “they may mandate them simply to put together different options, so that political choices are outlined”.

Negotiations in the UN Framework Convention on Climate Change (UNFCCC) remain scarred by a near-bustup at the 2009 summit in Copenhagen — the last time the world community strove to forge a climate treaty.

Since then, the mood has been for consensus rather than confrontation, although scientists and many observers fear the outcome may be too timid.

A string of meetings has recently been added to the already crowded climate agenda in the run-up to Paris.

The programme includes ministerial talks in Paris on July 21-22 and September 7; more negotiations in Bonn from August 31 to September 4 and October 19-23; and the General Assembly in September, when leaders will gather.