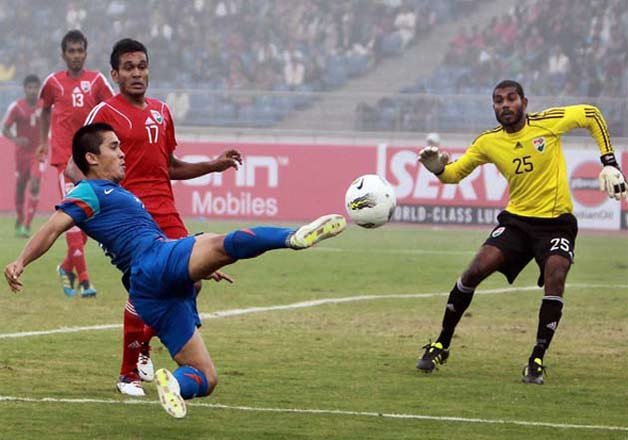 Bengaluru: An acid test awaits the Indian football team as it gets ready to host higher-ranked Oman in the second round opening match of AFC qualification for the 2018 FIFA World Cup here on Thursday.

Though India have made progress under Englishman Stephen Constantine, beating Nepal in a two-legged preliminary qualifier in March, the chief coach knows it’s going to require an extraordinary effort to emerge with a victory against Oman who, at 101, are ranked 40 places higher than the hosts in the pecking order.

The side will be led by Arnab Mondal and not Subrata Paul, Constantine said on the eve of the match.

The Indians have been training with renewed vigour for these matches. Last Saturday, Constantine put the team through a boot camp organised by the Indian Army on the ASC campus. It was a team-building exercise, meant to help push the side over the line.

In the four meetings against Oman so far, India have conceded 11 goals while winning just one fixture, losing two and drawing one.

The last time the two teams clashed was in Muscat in February 2012 when Oman won the friendly 5-1. The visitors would be keen to repeat the win while India would be drawing some confidence from their 2-0 and 0-0 results against Nepal in the first round.

The match at the Kanteerva Stadium is a chance for Oman to erase the bad memories of narrowly missing out on qualifying for the 2014 World Cup.

Instead of the usual practice of choosing the experienced players, Constantine has pinned lot of hopes on young brigade, which is reflected in the 26 probables he picked, including the likes of Jackichand Singh, C K Vineeth, Dhanpal Ganesh and Sehnaj Singh.

Constantine will like to focus more on strengthening the middle of the field as he is wary of the Omani goal threat.

The task will be cut out for Sandesh Jhingan and Arnab Mondal.

Sehnaj Singh and Eugenson Lyngdoh – both will be easy picks as they performed exceedingly well this season.