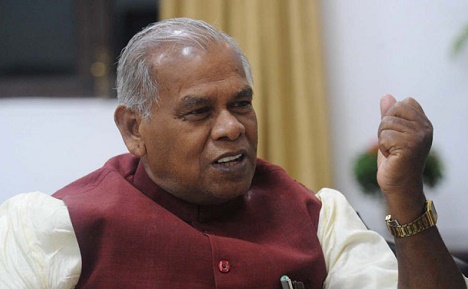 New Delhi:Â BJP on Thursday received a shot in the arm ahead of the high-stakes Bihar assembly elections, with former Chief Minister and Mahadalit leader Jitan Ram Manjhi announcing a tie-up with it to defeat the â€œunholyâ€ alliance of Nitish Kumar and Lalu Prasad.

Making the announcement after a meeting with BJP president Amit Shah, Manjhi said a strong alliance is needed to defeat the â€˜Janata Parivarâ€™ in the upcoming assembly elections.

â€œIn Bihar, an unholy alliance between Nitish Kumar and Lalu Prasad has been formed…I spoke to Amit Shah in this context. We have to work together to prevent Lalu and Nitish from coming to power,â€ Manjhi told reporters after the 30-minute meeting with the BJP chief.

The Mahadalit leader was being wooed by RJD chief Lalu Prasad but he had made it clear he would not be part of any formation which includes his bete noire Nitish Kumar, who ousted him as Chief Minister.

Manjhi said he had held rallies across the state where the â€œconsensusâ€ was to get â€œridâ€ of the Lalu-Nitish combine.

â€œYadavs feel that Lalu has betrayed them by joining hands with Nitish, who put thousands of Yadavs behind bars on petty charges. They no longer think that Lalu is their leader. Under these circumstances I felt that an alternative was needed,â€ he said.

The former Chief Minister said he will continue to run Hindustani Awam Morcha and it will become â€œa part and parcelâ€ of NDA to â€œdestroyâ€ the Lalu-Nitish alliance. Mr. Manjhi said he has already applied to the Election Commission for a symbol.

Asked about seat-sharing agreement with BJP, he said, â€œIt has been decided that we will go to whatever extent possible to help each other. We have not held any seat-sharing discussion. Our core committee will meet on June 15 and take a decision there. Our preparations are in all 243 seats.â€

On whether there will be a Chief Ministerial candidate of the alliance, he said, â€œIt will be better if the name of Chief Minister is announced after the election.â€

He noted that BJP had earlier decided not to project anyone as its chief ministerial candidate and it will take a call on the issue.

BJP, in its bid to stitch together a strong alliance for the Bihar polls, had been wooing Manjhi for a long time.

Shah had earlier in the day met Union Minister Upendra Khushwaha, whose party RLSP is part of the NDA, and discussed the strategy for the polls.