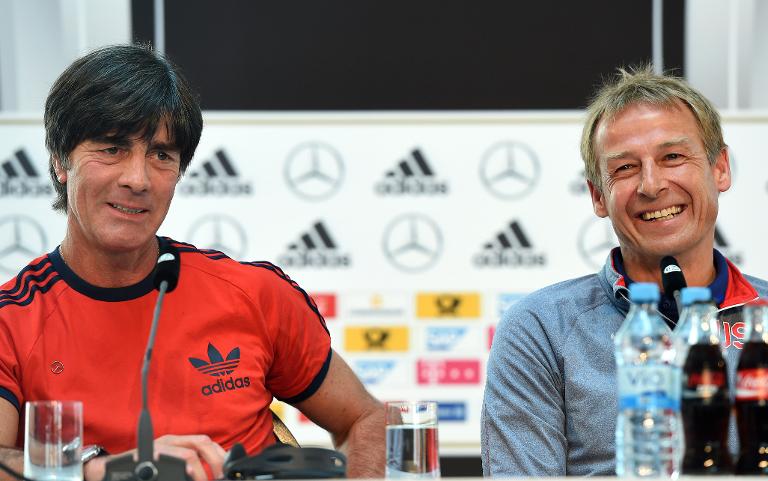 Jurgen Klinsmann says the USA need fear none of the world’s top teams after beating both world champions Germany and the Netherlands ahead of next month’s Gold Cup title defence.

Bobby Wood notched his second match-winning goal in five days with a thunderbolt strike against the Germans in Cologne on Wednesday having also netted the winner in the Stars and Stripes’ 4-3 win over the Dutch in Amsterdam last Friday.

The 22-year-old Wood, who was born in Honolulu and will ply his trade with Erzgebirge Aue in Germany’s third division next season, has had a dream five days.

According to the FIFA rankings, the USA are 27th with Germany first and the Ducth sixth, but Klinsmann insists on not putting much on either victory although the wins are confidence boosters ahead of July’s Gold Cup campaign.

“What do we have to be afraid of now?” said ex-Germany coach Klinsmann, who steered the USA to the last 16 at the 2014 World Cup having taken over as head coach in 2011.

“This victory will draw a bit more attention to football in America.

“We want to be able to trust ourselves to stand our ground against the top football nations.

“Germany and Holland were practically already on holiday, but the preparations for the Gold Cup really begin for us now.”

This was the USA’s fourth win over Germany, but their first on German soil as Mario Goetze’s early goal was cancelled out by Mikkel Diskerud’s equaliser four minutes from the half-time break before Wood’s winner.

The wins over the Dutch and Germans are even more impressive as Klinsmann was without senior injured forwards Jozy Altidore and Alejandro Bedoya, while Clint Dempsey sat out the trip as he expects his fourth child.

Klinsmann has targeted a semi-final berth for the 2018 World Cup in Russia.

First of all his team must book their passage to the 2017 Confederations Cup, also in Russia, by defending the Gold Cup title they won after beating Panama in the 2013 final.

The USA have one final warm-up match, against Guatemala on July 3, before their Gold Cup campaign starts against Honduras four days later in Texas.

They play Haiti on July 10 at Foxborough, Massachusetts, and finish the first round three days later against Panama in Kansas City.

Victory, in the final on July 26 in Philadelphia, would earn a berth at the 2017 Confederations Cup in Russia.