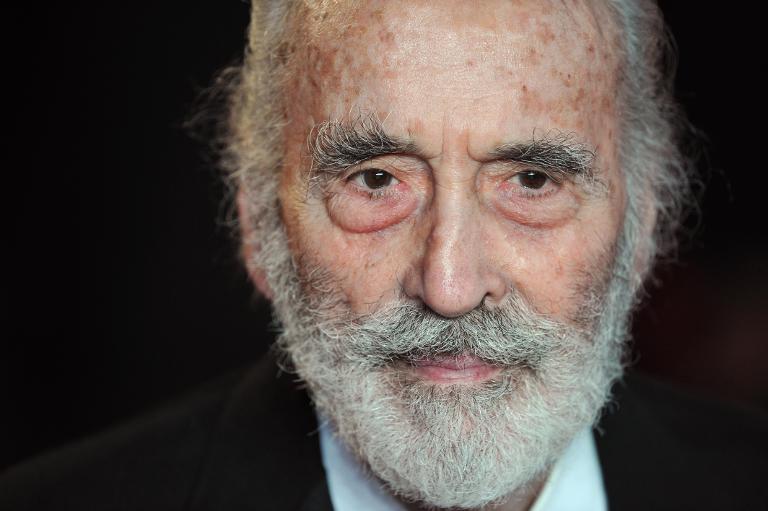 Tall, pale and with a deep resonating voice, British actor Christopher Lee, whose death was confirmed Thursday, will forever be remembered for his spine-chilling performance as Dracula in the cult Hammer Horror movies.

The 93-year-old appeared in more than 250 films and television shows, including “The Lord of the Rings”, “Star Wars” and “The Man with the Golden Gun”, but could never shake off his image as the bloody-thirsty vampire.

Lee died in his home city of London on Sunday, the local authority which issued his death certificate said.

According to The Daily Telegraph newspaper, he died in hospital, where he had been treated for respiratory problems and heart failure over the preceding three weeks.

The Hammer films opposite Peter Cushing in the 1950s launched Lee’s movie career, and although he later expressed frustration at being typecast, he entrenched his image by playing a succession of exotic villains.

“They’re more interesting, because there’s a greater variety you can apply: you can be very cruel or charming, amusing or dangerous,” Lee said.

However, he criticised the gratuitous violence of many modern films, arguing the power of suggestion was more terrifying — something he mastered early on, scaring the wits out of viewers with his piercing gaze.

Lee was recognised for his achievements with a knighthood in 2009, when he admitted his pleasure in a long career.

“What’s really important for me is, as an old man, I’m known by my own generation and the next generation know me too,” he said.

A devotee of heavy metal — a genre partly inspired by the sort of horror films he starred in — Lee sang on several albums. His last “Metal Knight”, was released on his 92nd birthday, followed by a metal Christmas carol in 2014.

Lee’s “Lord of the Rings” co-star Dominic Monaghan led the tributes, saying: “So, so sorry to hear that Christopher Lee has passed away. He was a fascinating person.”

Prime Minister David Cameron described him as “a titan of the golden age of cinema and a distinguished WW2 veteran who’ll be greatly missed.”

Lee was born in London on May 27, 1922, to a decorated army colonel and an Italian countess, and attended the elite schools of Eton and Westminster.

He served in the Royal Air Force in World War II, at one point being attached to the special forces.

After the war, Lee had a succession of bit parts in film, theatre and radio, although at six feet four inches (1.95 metres), he said he suffered from being “too tall and too foreign-looking”.

His big break came when he signed with Britain’s legendary Hammer studios to make “The Curse of Frankenstein” in 1957.

Lee later returned to the Hammer brand opposite Hollywood actress Hilary Swank in thriller “The Resident” (2010).

Other scary roles included the Fu Manchu series and most notably “The Wicker Man” (1973) with Edward Woodward, which became one of the great cult films of all time.

“That’s the story of my career really, making cult movies,” Lee once said.

Another villainously brilliant role saw Lee as Scaramanga, the eponymous assassin opposite Roger Moore’s James Bond in 1974’s “The Man With the Golden Gun”.

In a rare break from type, Lee hosted a one-off episode of US television show “Saturday Night Live” in 1978, which he relished because it showed he could be funny.

Lee considered his portrayal of Pakistan’s founder Mohammed Ali Jinnah in the little-seen “Jinnah” (1998) as his “best performance, no question”.

But for many young fans he will be best known as Count Dooku in the “Star Wars” prequels and as Saruman in the films based on J. R. R. Tolkien’s “The Lord of the Rings”.

As Saruman, Lee used his voice and steely gaze to maximum effect as the wizard corrupted by power.

Lee married former Danish model Gitte Kroencke in 1961 and had one daughter, Christina. The actor’s agent said the family would not be making any comment.