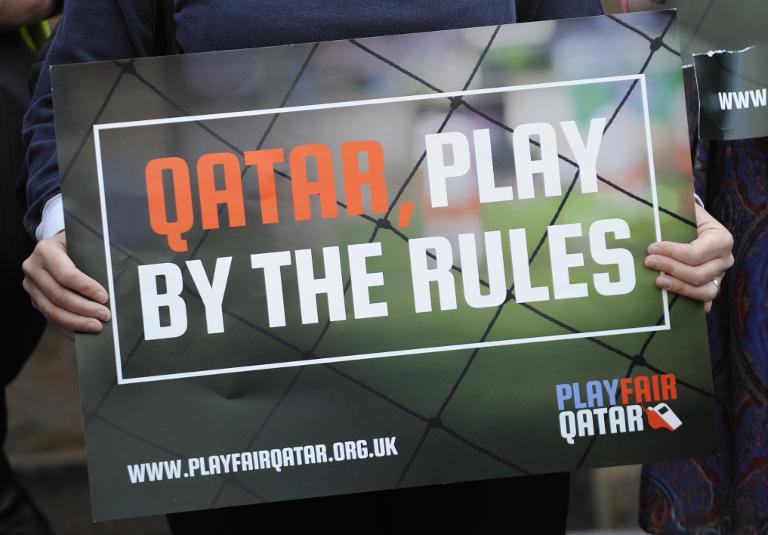 Foreign ministers from the Gulf states on Thursday hit out at the “hateful campaign” directed against Qatar’s controversial hosting of the 2022 World Cup.

In a strongly-worded statement following a meeting of Gulf Cooperation Council (GCC) foreign ministers in the Saudi Arabian capital Riyadh, Qatar’s neighbours affirmed their full support for the tournament, which would be the first World Cup hosted in the Middle East.

“The ministerial council has expressed great condemnation of the hateful campaign that is trying to discredit the merit of Qatar in hosting the 2022 World Cup,” read the statement.

“It has insisted that the GCC countries stand with Qatar in solidarity and with full support to the hosting of this International sporting event, a hosting that Qatar has won with great merit and through a honest competition as testified by everybody.”

Qatar’s hosting of football’s premier tournament, long criticised by many over corruption and human rights abuse allegations, has come under further intense scrutiny because of the scandal engulfing the sport’s governing body, FIFA.

Following the arrest of 14 current or former FIFA officials and sports marketing executives accused by US prosecutors of taking part in a major kickbacks scheme involving a total of $150 million in bribes, Swiss judicial authorities have launched an investigation into the awarding of the 2022 competition and the tournament in Russia four years earlier.

On Sunday, a FIFA official said Qatar could lose the World Cup if allegations of wide scale bribery could be proved.

“If evidence exists that Qatar and Russia received the (World Cup) awards only thanks to bribes, then the awards could be annulled,” head of FIFA’s auditing and compliance committee Domenico Scala told the Swiss Sonntagszeitung weekly.

His comments were the first by a FIFA official to admit the possibility that Qatar could lose hosting football’s showpiece.

Scala added, however, that no such evidence had been provided so far.

Qatar has maintained that its bid remains unaffected by the latest allegations.

Thursday’s statement from the GCC — comprised of Bahrain, Kuwait, Saudi Arabia, Oman, the United Arab Emirates as well as Qatar — followed a call 24 hours earlier for media in the region to “counter” criticism of the 2022 tournament.

GCC Information ministers meeting in the Qatari capital Doha urged media to “counter all those who seek to question the right of the State of Qatar to host the 2022 World Cup”.