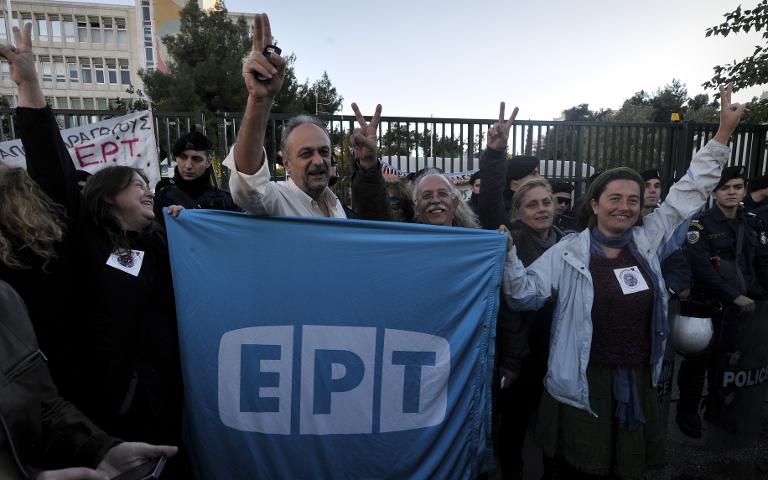 Greece’s public broadcaster ERT came back on the air on Thursday, exactly two years after it was shut down by the previous government, which accused it of being wasteful and mismanaged.

The reinstatement of the channel — which was replaced by a scaled-down version named Nerit — was one of the election promises of the new government under the radical leftists Syriza, who have been in power for less than six months.

The previous conservative-led government in July 2013 shut down the TV station and fired some 2,600 people in order to meet layoff quotas laid down by Greece’s international creditors.

Its sudden closure after more than 60 years of service shocked Greeks, provoked numerous demonstrations and was condemned internationally.

A news programme was the first broadcast to appear on the channel on Thursday shortly after 6:00 am (0300 GMT), with two presenters saying they were moved to be back on the air and promising that the resurrected broadcaster would be “television for the Greeks… and will not be controlled by any government.”

The bill to reopen ERT was adopted by parliament in April with the backing of Syriza and its coalition partners, the Independent Greeks.

The main opposition New Democracy party voted against the legislation.

Under the bill, any of ERT’s 2,600 employees who wish to return to work can do so and have until June 16 to submit their applications. A source at the information ministry told AFP that as of Monday 1,600 former employees said they wanted to come back.

The law set the cost of the broadcaster at 60 million euros ($68 million) a year and would be covered by a licence fee of three euros a month.

A year after ERT’s closure it was rebranded as Nerit, with a smaller budget and 500 employees.

Prime Minister Alexis Tsipras made it his mission to bring back ERT, calling its closure “a crime against Greek people and democracy”.