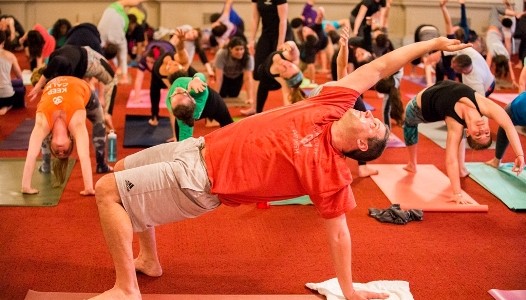 This Yoga Day has the potential to garner a lot of eye balls. Donâ€™t believe us? With a 30-crore budget, and tickets that are bar-coded, an official auditor, the government will attempt the yoga world record â€” two of them actually â€” on June 21.

Largest yoga class: The Yoga Day celebrations will complete against a Kanyakumari-based NGO, the Vivekananda Kendra, that holds the current world record in organising the largest yoga class.

The presence of most number of people: This Yoga Day is attracting thousands of people, thanks to which it is confident that it will script a new record for the presence of people from most nationalities in one yoga class.

According to a quote published on the Indian Express, Jamie Clarke, Press Officer of the Guinness World Records Limited said, â€œWe can confirm that we have received a record application from the Ministry of AYUSH, Government of India, and they will attempt two Guinness World Records titles â€” for the largest yoga class and most nationalities in a yoga lesson. The record to beat for the largest yoga class is 29,973, and was achieved by students from 362 schools, who performed a sequence of yogic kriyas called Surya Namaskar, simultaneously for 18 minutes, led by Vivekanand Kendra (India), at Jiwaji University, Gwalior, India on 19 November 2005.â€

He added that there is no existing record for most nationalities in a Yoga lesson. Guinness on its own, has set a target of at least 50 nations for the record to be admissible.

All participants will have to enter the venue â€” a 1400 m stretch of Rajpath â€” with bar-coded entry tickets. Consolidated attendance figure displayed by the scanner at the end of the function will be taken as the official attendance figure. For every 50 mats there will be one volunteer to check occupancy. The volunteers will be from neutral organisations like the National Service Scheme, under the Ministry of Youth Affairs and Sports.