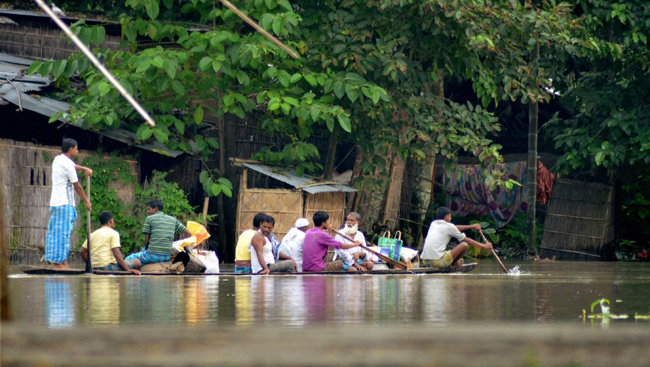 Guwahati: It is that time of the year when Assam floats like a paper boat in a puddle. Torrential rain, flood and landslides wreak havoc affecting lakhs of people.

The flood situation in Assam worsened rapidly on Wednesday with the overflowing Brahmaputra and several of its tributaries affecting over 1.95 lakh people in 13 districts. Lakhimpur remained the worst-affected with over 60,806 people hit, while in Barpeta it rose to 43,340 and in Dhemaji the figure was 29, 869.

The Brahmaputra at Nematighat in Jorhat district, the Jia Bharali river in Sonitpur district and Puthimari river in Kamrup district were flowing above danger level on Wednesday.

The floodwaters have entered the Kaziranga National Park as well, forcing animals to move to drier and safer areas.

While three relief camps were set up by the authorities in another hard hit district, Tinsukia on Tuesday, one more camp was opened on Wednesday at Sonitpur.

According to the Assam State Disaster Management Authority report, around 8,200 hectares of standing crop, mostly paddy, have been damaged by the overflowing rivers.

Meanwhile, the situation is no different in Arunachal Pradesh. Two persons were killed in rain-induced landslides in Itanagar where rain and flash floods have caused extensive damage to the road network, cutting off many areas for over 48 hours.

According to an alert from the Disaster Management Department in Arunachal Pradesh, the flood situation is likely to worsen as heavy rainfall is expected in the state till June 13 next.

The Arunachal Pradesh government has ordered closure of all schools in the state capital from today till June 13.