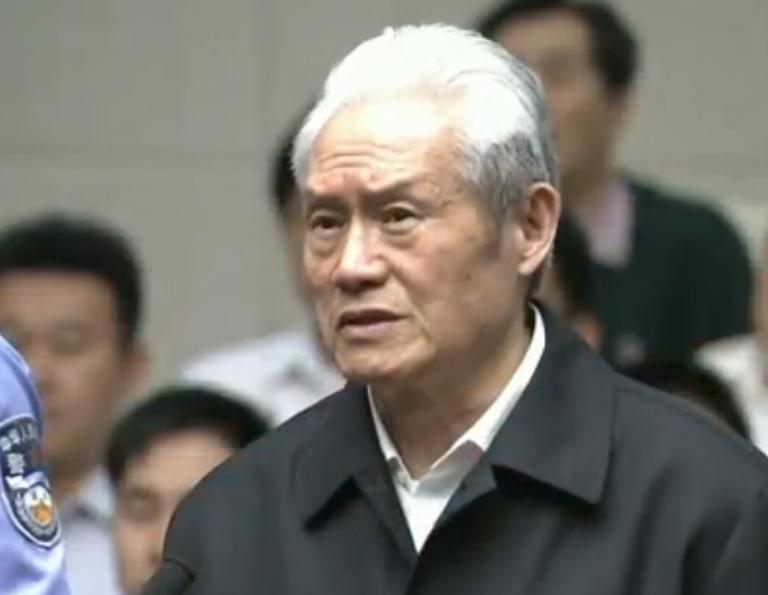 He admitted to charges of “bribery, abuse of power and leaking state secrets” at a closed hearing in the northern city of Tianjin, the official Xinhua news agency said in a surprise report.

Zhou, 72, is a former member of the ruling Communist Party’s all-powerful Politburo Standing Committee who wielded vast power as head of the police and courts until his retirement in 2012.

State broadcaster CCTV showed a humbled Zhou bowing his head and saying he “admitted his crimes” in a wood-panelled court, his black hair now white and his previously fierce expression gone.

“I acknowledge that the facts of my crimes have caused great damage to the Party’s work,” he said, surrounded by dark-suited court officials.

Zhou was convicted of taking bribes of about 130 million yuan, it said, adding that he would not appeal and the court will confiscate his personal property.

He also passed on five “top-secret documents” to Cao Yongzheng, who is described in reports as a fortune-teller and practitioner of a mysterious Chinese martial art known as “Qigong,” it said.

China’s President Xi Jinping has vowed to clamp down on corrupt officials in a campaign against endemic corruption, with a number of former high-fliers placed under investigation since he came to power in 2012.

But critics say that lack of systemic reforms, such as separating the judiciary from government control or allowing media to report freely on graft, mean the drive is little more than an excuse for political witch-hunting.

Zhou is the highest ranking Chinese official to be sentenced in court since the infamous Gang of Four — including former leader Mao Zedong’s widow Jiang Qing — were put on trial and blamed for the chaos of the Cultural Revolution.

After months of rumours, the Communist Party announced in July that Zhou was being investigated before he was arrested in December.

The party closely controls China’s courts, which have a near-perfect conviction rate, meaning Zhou was virtually certain to be found guilty.

Charges of bribery in China can in some case carry the death-sentence, but analysts said that had been an unlikely scenario given Zhou’s status.

By investigating such a prominent official, Xi had demonstrated his clout and “did not have to go that far to sentence him to a death sentence,” Willy Lam, an expert on Chinese politics at the Chinese University of Hong Kong, told AFP.

Joseph Cheng, professor of political science at City University of Hong Kong, said the sentence was widely expected and the main aim was “there must be an end to his political life”.

A court statement cited by Xinhua said Zhou’s leaking of state secrets “did not have serious consequences” and his guilty plea and remorse constituted grounds for lesser punishment.

The date of the sentencing was not announced in advance, and Xinhua said it was not open because Zhou’s crimes involve state secrets.

The secrecy of the proceeding contrasted with the corruption trial of former Politburo member Bo Xilai in 2013, when edited transcripts of court proceedings were released online.

Lam said that officials likely feared Zhou “might do what Bo Xilai did, to take back the confessions he has made, to issue an open challenge to the authorities”.

The trial marked “a retrogression of both the rule of law and the independence of the judiciary,” he added.

The length of the trial, which began May 22, was not given by Xinhua, which said it included video testimony from Zhou’s wife and son.

Zhou rose from comparatively humble origins to prominence in the state-run petroleum industry.

He become a central figure in what analysts termed the “oil faction” — linking politicians with the lucrative sector — and is sometimes described as “China’s Dick Cheney”.

In 2002 he ascended to the upper echelons of Chinese leadership, gaining a place in the ruling party’s 25-member Politburo and the role of minister of public security.

Five years later he stepped up to the Politburo Standing Committee and was responsible for China’s internal security, including police, courts, jails and domestic surveillance.

His tenure was marked by the brutal use of force in response to civil unrest and increased surveillance and repression of anyone perceived as challenging the Communist Party.