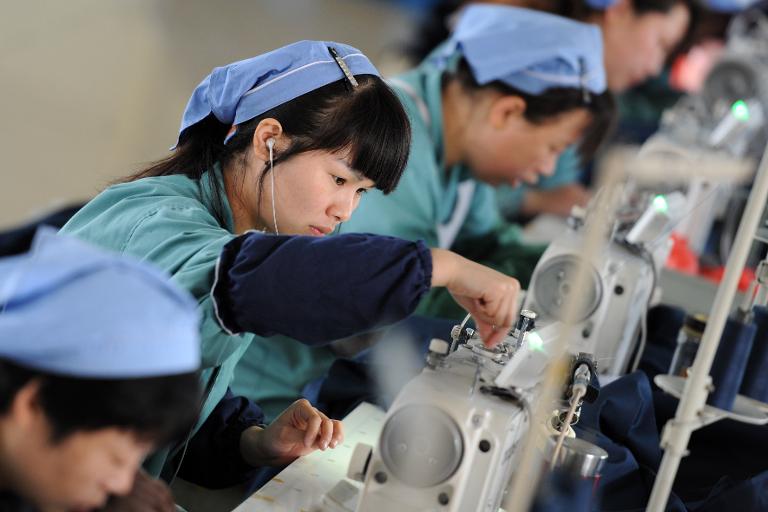 Growth in China’s industrial production hit a three-month high in May, figures showed Thursday, while expansion in retail sales rebounded from a nine-year low in cautiously positive signs for the world’s second-largest economy.

Industrial output, which measures output at factories, workshops and mines, rose 6.1 percent year-on-year in May, the National Bureau of Statistics (NBS) said in a statement.

The industrial output figure was the highest since a reading of 6.8 percent growth in January-February, when the data were released for two months to iron out distortions related to Chinese New Year.

The May increase was also above the 5.9 percent recorded in April and marginally above the median 6.0 percent rise in a forecast of economists by Bloomberg News.

The retail sales result, meanwhile, was just above April’s 10.0 percent rise, which was a nine-year low.

The results came as China’s economy has continued to slow in 2015 after growing at its weakest pace — 7.4 percent — in nearly a quarter-century last year.

China’s authorities are trying to engineer a controlled slowdown as they seek to transform the country’s growth model to one in which consumer spending becomes the key driver, as opposed to heavy infrastructure investment.

In a sign that the makeover is proceeding, the NBS also announced that growth in fixed asset investment — a measure of government spending on infrastructure — slowed further, expanding 11.4 percent year-on-year in the January-May period, the lowest since December 2000, according to previous figures.

Officials, however, fear too fast a deceleration in economic growth and have carried out stimulatory measures including lowering interest rates to help ensure the slowdown does not get out of hand.

The central People’s Bank of China (PBoC) has cut benchmark interest rates three times since November and also implemented reductions in the amount of funds banks must keep on hand in a bid to encourage lending and help pump up economic growth.

Separately, the central bank said Thursday that China’s bank lending expanded in May and the broader money supply also grew, a sign its efforts to loosen policy to boost growth are bearing fruit.

Still, analysts are broadly expecting the PBoC to take further easing steps to boost the economy.

“As growth stabilises, the People’s Bank of China may pause its monetary easing in June to evaluate the impact of the easing measures it has taken so far,” Nomura economists said in a note.

“However, growth is still at a low level, with investment demand notably remaining weak.”

China earlier this week announced weak trade data, with imports falling for a seventh straight month in May and exports also declining for a third consecutive month.

Economists Liu Li-Gang and Zhou Hao at ANZ took a more pessimistic view of Thursday’s figures in the aftermath of the disappointing trade figures.

“In general, there is little improvement in China’s activity data in May,” they wrote in a reaction and suggested that GDP growth for the April-June quarter, due to be announced next month, may dip below the 7.0 percent recorded in the first three months of the year.

“It appears that the monetary easing so far has had limited impact on improving growth momentum,” they wrote.

And NBS analyst Jiang Yuan said in a statement that the numbers should not be seen in too positive a light.

“Despite industrial output growth having picked up marginally over the past two months, domestic and external market demand for industrial products remained relatively weak, the basis for the recovery in industrial production was not consolidated and the downward pressure is still rather big,” Jiang said.