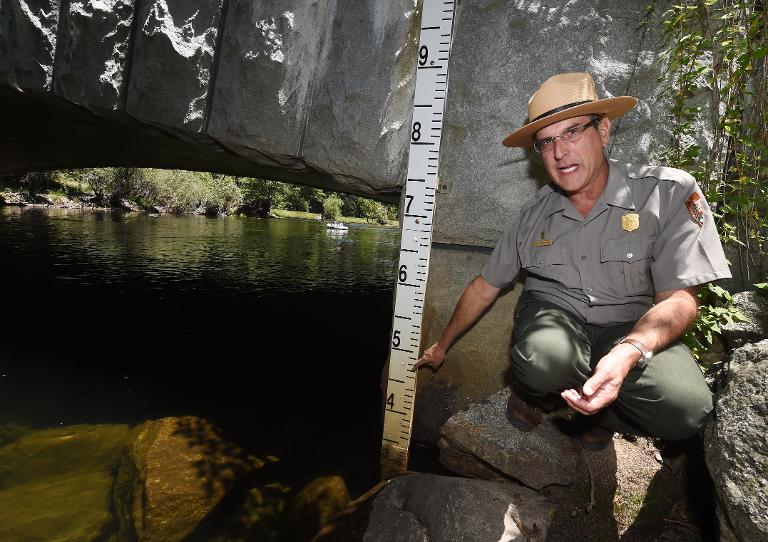 It is one of America’s most popular natural wonders. But even Yosemite National Park cannot escape the drought ravaging California, now in its fourth year and fueling growing concern.

At first glance, the spectacular beauty of the park with its soaring cliffs and picture-postcard valley floor remains unblemished, still enchanting the millions of tourists who flock the landmark every year.

But on closer inspection, the drought’s effects are clearly visible.

The towering 8,840-foot (2,695-meter) Half Dome rock monolith, photographed by millions every year, is normally reflected in the surface of Mirror Lake below.

But the water is now well below its normal level, exposing sandbanks on which tourists lounge around sunbathing, while children splash about in large puddles.

Yosemite Falls, the easiest to access of the various waterfalls at the park, is more of a dribble than a gush — reflecting the minimal winter snowfall that has left a seriously diminished snowpack on the nearby Sierra Nevada.

The Merced River, one of California’s biggest water courses running through the park, is currently barely three feet deep, compared to easily seven feet this time of year.

“This is the true indicator for me,” said Gediman, pointing at a gauge that shows the depth.

“Seeing that the water level… is just over three feet and here we are it’s not even summer yet, and we’re looking at warmer temperatures, a record-low snowpack, just tells me how much of a drought we are really in.”

Facing the growing threat of climate change, negotiators are gathered in Bonn, Germany this week trying to reach a global pre-agreement before this fall’s Paris conference on global warming.

In California, the situation is particularly critical.

The western US state’s governor, Jerry Brown, announced sweeping statewide water restrictions for the first time in history in April to cut water consumption by 25 percent.

Yosemite is not subject to the cuts because it is managed by the federal government. But the park is nonetheless appealing to visitors not to waste any of the precious resource.

The drought has not dented Yosemite’s popularity: since it started in 2011, the park has registered an average of four million visitors.

“You’re just mindful of your water use like when you are doing dishes and everything,” said Teri Smail, a camper from Northern California in the park having breakfast with her family.

“Everybody is very conservative. If we have leftover water bottles, we are not throwing them away, we are using them for coffee in the morning. These are just little things that you can do to conserve. You just have to be very conscious.”

“Rafting usually opens Memorial day weekend, which is the last weekend of May, and we usually go until early August, sometimes September, depending on the weather,” said Robert Crane of rafting rental company Delaware North.

“This year, we started a little bit early and we will be closing early as well.”

He added: “When the water gets down to about 1.5 feet, that’s when there is just not enough flow… and the rocks are starting to protrude out, you have to get out and pull the raft a couple of times.”

The lack of rain and high temperatures in the last few years have left the park vulnerable to wildfires.

In 2013, the Rim Fire became California’s third-biggest blaze ever, burning more than 400 square miles (1,040 square km) of land despite the efforts of 5,000 firefighters with 20 helicopters.

Last year, another fire ravaged nearly six square miles, threatening some of the giant Sequoia trees for which the park is also known.

With little moisture, trees are vulnerable, particularly to beetles that feast on their roots and can kill them eventually.

But despite the drought, the park remains one of the most spectacular destinations in America.

“People come to Yosemite from all over the world,” said Gediman.

“Even in the fall, the driest time of the year, with the huge granite formations and the beautiful meadows, it’s beautiful year-round.”