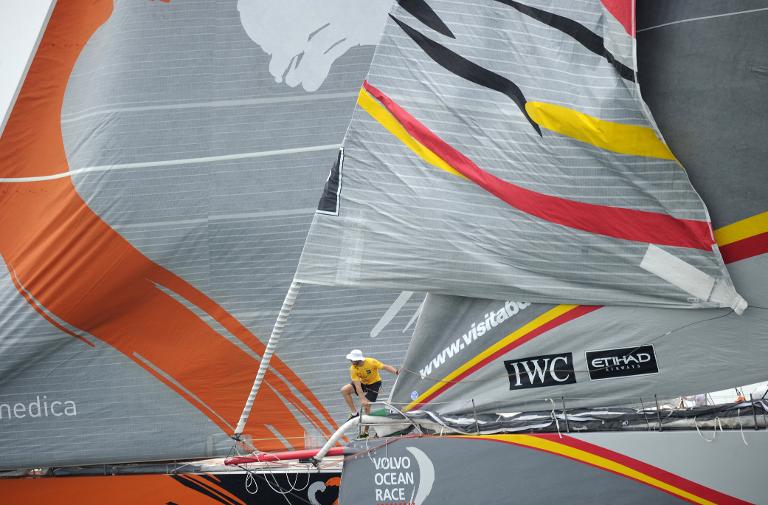 Abu Dhabi Ocean Racing all but closed out the 12th edition of the Volvo Ocean Race on Thursday when their third place into Lorient on leg eight left them with an eight-point advantage over their nearest rivals.

Only a serious breach of sailing rules in the final leg incurring a multiple point penalty â€“- even if they finish last â€“- can now prevent the Emirati crew from lifting the trophy at the race’s final port of Gothenburg in the last week of June.

Their British skipper Ian Walker is a twice-Olympic silver medallist who narrowly missed out on Star class gold in the final race of the 2004 Athens Games.

He has led his team brilliantly since setting out in early October last year for a race that covers 38,739 nautical miles and visits 11 ports plus every continent.

His pre-race game plan was simply to finish in a top-three podium finish in each of the nine legs of the race and, with the exception of the seventh when they were fifth, he has carried out that strategy to perfection.

After crossing the line just before dawn in Lorient in Brittany, Walker told reporters that his achievement in fulfilling a lifelong ambition was taking time to sink in.

No British skipper has won the overall trophy in the 41-year history of an event that was first launched as the Whitbread Round the World Race in Portsmouth, England.

“When we passed the finish line we all went quiet and asked ourselves ‘is that it?’,” said a still dazed Walker.

“But I can’t thank our team enough. We made a plan one and a half years ago and we just carried out that plan.”

He could not resist a thought of the reaction ‘back home’ in Abu Dhabi. “I bet they’re going nuts,” he said. “We couldn’t have done it without their backing.”

The win was a first for a female crew in the event, formerly the Whitbread Round the World Race, since Tracy Edwards’ Maiden clinched two stage wins in Class D of the 1989-90 edition, won overall by Sir Peter Blake’s famous Steinlager2.

At least as satisfying for the first all-women’s crew to enter the race in 12 years will be the opportunity to silence critics who suggested that they were looking outclassed in the current 12th edition by their experienced male rivals.

The Swedish entry has failed to win a podium place until now, but the crew has clearly improved leg after leg and many observers felt that a breakthrough performance was just around the corner.

Behind them, another dream finish was realised as Team Vestas Wind closed to second place in their return to the race after six months out for a boat rebuild following a collision with an Indian Ocean reef on November 29 during leg two.

The boats will now have a short maintenance period before Sunday’s in-port race in Lorient. The fleet will then set sail for Gothenburg, via a pit-stop in The Hague, on Tuesday, June 16.

The race concludes in Gothenburg on June 27, having covered 38,739nm and visited 11 ports and every continent.