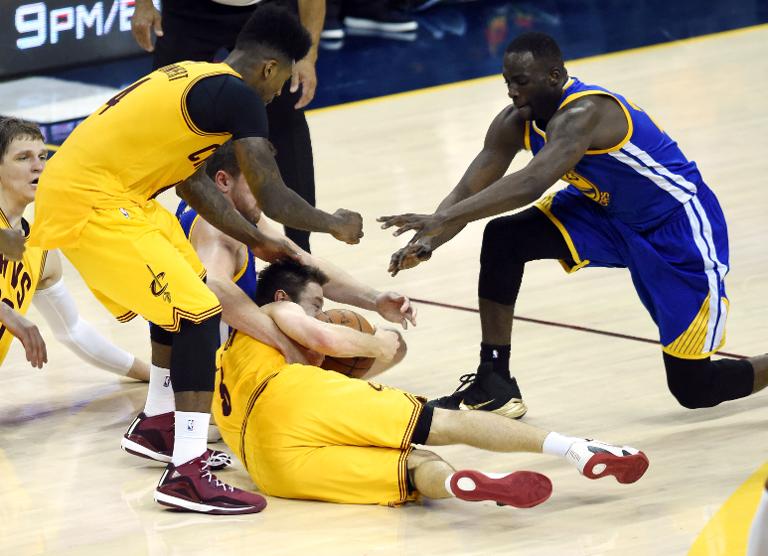 Weary and sore, the Cleveland Cavaliers are fighting injury and exhaustion in the NBA Finals while trying to outlast the Golden State Warriors and end their city’s half-century sports title drought.

The Cavaliers, ahead 2-1 in the best-of-seven series, received good news Wednesday when doctors said guards Matthew Dellavedova and Iman Shumpert would be ready for game four Thursday.

“I’ve pushed the limit a few times, but that’s probably the tightest I’ve been,” Dellavedova said. “I’m feeling good now though. I’ll be ready to go.”

Shumpert suffered a bruised left shoulder in the first quarter after running into a screen set by Golden State’s Draymond Green.

“I’m sore but it’ll be all right,” said Shumpert. “You have to play hard as you can until you are in a state of complete exhaustion. We can be tired after the season. We refuse to let somebody play harder.”

That attitude starts with LeBron James, who is averaging an NBA Finals record 41 points, 12 rebounds and 8.3 assists as he tries to bring his hometown its first champion since the 1964 NFL Browns.

“You just try to give everything you have,” James said. “After the game I’m able to decompress. I’m not getting much sleep but I’m OK… it’s taxing, but I accept the challenge.”

But does Cleveland have the energy to keep silencing the NBA’s most prolific scoring attack?

“I definitely think this team has more than enough in the tank,” Shumpert said. “Toughness is just knowing in your mind you’re going to take a lot: exhaustion, injury, fatigue, teams making a run at you. We find a way to pull it out and keep the train on the tracks.”

The Warriors have not led at the end of any quarter except after over-time in game one, the period in which the Cavaliers lost Kyrie Irving to a fractured left kneecap. Since then, Dellavedova has shined despite the toll it took Tuesday.

“We’re doing a lot of things,” said Dellavedova. “Right now it’s just getting as much fluids in as you can and just trying to eat a lot.”

– Delly will be watched –

“I told him I was going to limit his minutes, and he said, ‘No, you’re not,'” Blatt said. “We’ve got to be realistic and keep our eyes on him and see how he recovers. He emptied the tank last night.

“We’ll just monitor how he’s doing. I’m not going to come in there with a specific minute restriction, but we’ll definitely be conscious of it.”

“It would take a lot for me not to play,” he said. “It’s going to take some structural damage.”

James said he cannot feel the epic nature of his performance, saying he and his brother plan to watch replays later over wine when he can enjoy it.

“I truly don’t feel it,” James said. “I don’t go home and turn on the TV and watch highlights. I went home last night and I watched ‘Chopped’ and then ‘Teen Titans’ after that at 2:30 in the morning.”

NBA Most Valuable Player Steph Curry says Golden State has faith it can win the crown after two narrow losses in the final seconds.

“We’re pretty confident we can turn this around,” Curry said. “We have to be better, obviously. We can’t come in after every game and say we missed open shots. We’ve got to start making them and start playing better as a group. Just got to play harder, more aggressive and make it happen.”

“I wouldn’t say we’re not fighting, but we could fight more,” Iguodala said. “We’ve definitely got to fight a little bit harder and being down 2-1, you’ve got to pull some extra stuff up out of you to try to get a win.”

“That’s what we’re looking at, how can we speed the game up,” Kerr said. “We’re one win away from being right back where we need to be. It’s a day to regroup and see what we can do better and get our heads up and be ready.”