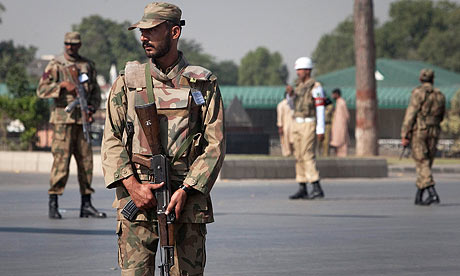 New Delhi: Pakistan Senate on Thursday unanimously passed a resolution condemning remarks by Indian leaders on Pakistan as “proactive and hostile” and said it reflected the Indian “hegemonic mindset”.

Pakistan has been sharply critical of India with its leaders slamming Prime Minister Narendra Modi’s recent remarks in Bangladesh that Pakistan was creating disturbance and instigating terrorism in India.

The resolution, moved by Leader of the House Raja Zafarul Haq, said such “crude attempts” by India are unacceptable and Pakistan rejects this “hegemonic mindset”.

The resolution condemned the recent “disturbing pattern of provocative and hostile” statements by Indian leaders including threatening attacks against Pakistani territory.

The resolution said the Upper House of the Parliament wishes to emphasise that Pakistan will never allow its territory to be violated by India under any pretext.

Minister of State for Information and Broadcasting Rajyavardhan Singh Rathore had said in the wake of the military action in Myanmar that it was a message to other countries which was interpreted as a warning to Pakistan.

The resolution stated that the Pakistan armed forces are fully capable of giving a befitting response to any incursion and Pakistani people stand shoulder to shoulder with their armed forces, Radio Pakistan reported.

The House urged the international community to take note of such “provocative statements” which it said negatively affected the prospects for regional peace, sovereignty and stability.

The resolution said at a time when the entire Pakistani nation, particularly the armed forces are engaged in the battle against terrorism, Indian provocations are not only undermining Pakistan’s anti-terror campaign but actually aiding and abetting terrorists fighting against Pakistan.

Concluding the discussion, Haq said being a nuclear power Pakistan’s defence has been made indispensable. He said the statement of Modi is against the UN Charter.

Haq alleged that India on one hand is making a “useless effort” to become a permanent member of UN Security Council and on the other hand it is “violating the UN Charter by carrying out human rights violations in Kashmir.”

He said the security forces of Pakistan are engaged in the fight against terrorism to save the world from the menace. Haq claimed India’s activities to distract attention from the war are a “crime against humanity”.