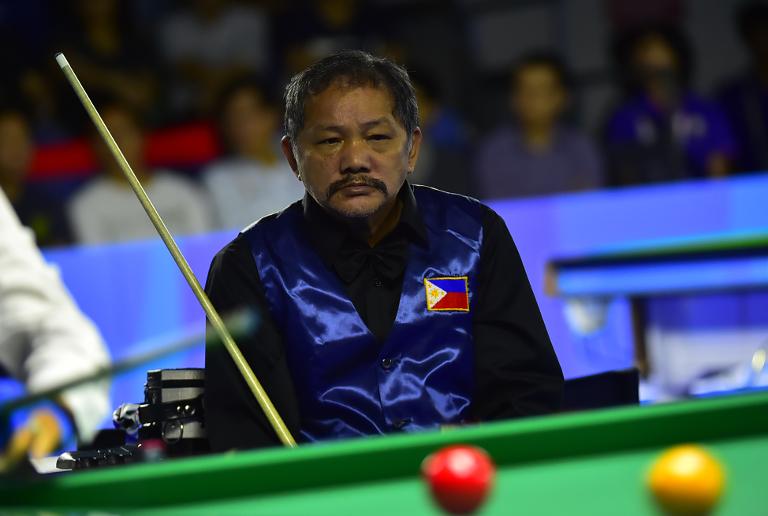 Few sportspeople have perfected their craft like Efren Reyes, but the one-time king of pool admits age is catching up with him as he finally yields to younger talent.

The 60-year-old Filipino says neck pain, his eyes and even the strength of his arms can betray him in long matches, and he is weary after losing to wave after wave of hotshots.

“That’s a long time ago,” he said at the Southeast Asian (SEA) Games, when reminded of his heyday when he hoarded world titles and was widely regarded as the globe’s finest player.

“At this time there’s a lot of good players from the Philippines. Everybody can beat me.”

Reyes shuffled out of Singapore’s SEA Games in the semi-finals of one-cushion carom, an obscure, delicate game in which the Philippines has few players.

Two competitors must use their cue-ball to hit the only two other balls on a pocketless table, scoring one point for each successful shot. The winner is the first to 100.

Reyes’ vision and shot-making came to the fore as he clawed back from 80-56 down to level at 84-all, before a lapse in concentration allowed his opponent back to the table.

And Vietnam’s Ma Minh Cam, wearing a distinctive blue glove on his bridge hand to ease friction, seized victory with a 16 break on his next visit.

Afterwards Reyes, wearing a crumpled, dark blue waistcoat and a resigned expression, rued the mistake which consigned him to his third SEA Games bronze in the little-known sport.

“I missed an easy shot, if I hadn’t missed that maybe I would have won that game,” he said.

His chief role in the multi-sport SEA Games was as practice partner for Filipino pool players, he says, much like his usual routine in his home country.

Reyes, who has shifted out of the capital Manila back to his home province of Pampanga, is regularly invited to “money games” where players and gamblers will bet cash.

It’s very much back to his roots in the sport, where he played in his uncle’s “Lucky 13” pool hall from the age of eight, rising from money games to tournaments to hustling in the United States.

Finally he reached pool’s nascent world stage, where his battles with Earl “The Pearl” Strickland and others were broadcast around the globe, becoming minor classics.

“We always are playing pool every day. We play money games of pool, that’s our practice,” he said.

“If I come, they pay me and they make extra on betting. For me, I don’t bet but other people bet on me.”

Every day, he practises in pool halls, at quiet times when nobody else is on the tables — usually mornings and evenings — and often in short bursts.

“Sometimes it’s only 30 minutes, and then I stop and play later. I cannot play longer because it makes me tired,” Reyes said.

He says he has trouble in nine-ball games in the Philippines, which are traditionally a race to 21 racks, putting the onus on stamina.

“It’s still okay, I still can play longer like that. But my eyes sometimes are no good, sometimes it hurts to stand,” he said.

“My neck hurts because I cannot move too good. And even my arms, I cannot hold the cue any more very good.”

He says the pressure is always on him when he plays, given his collection of more than 70 international titles, and he is often challenged to a game.

“Everybody likes to play challenge games against me. Everywhere they want to play because they want to beat me,” he said. “It’s a lot of pressure for me. Other players like to play and I don’t think they have that pressure.”

But even though his glories are firmly in the past, Reyes, who was next heading to the United States for a tournament there, says he has to keep playing.

“This is my job, playing pool. I make money through my sport,” he said, before walking to the stadium exit with his cue bag over his shoulder.