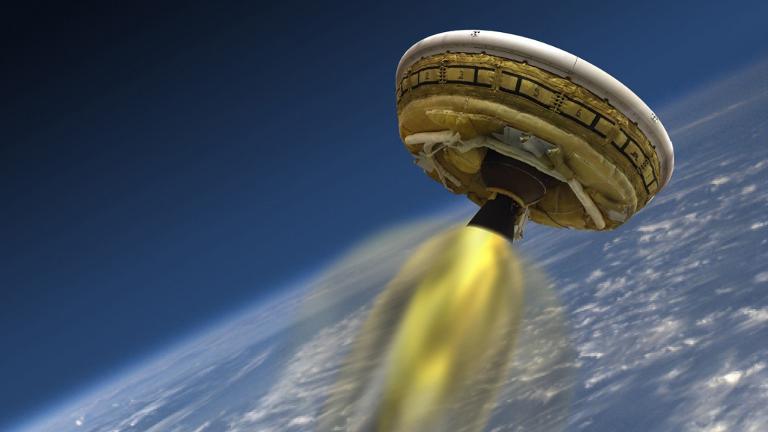 NASA scientists working toward putting people on Mars said Tuesday a supersonic parachute they are developing to slow a vehicle’s approach to the Red Planet partially deployed in a test, but immediately ripped apart.

The 100-foot-wide (30-meter) chute was sent into Earth’s upper atmosphere aboard a sort of “flying saucer” test vehicle that was hoisted to the heavens via a giant balloon lifting off from Hawaii on Monday.

It was the second such test of the enormous parachute, the largest supersonic chute ever deployed, which is being designed to slow the three-ton test craft as it travels at more than twice the speed of sound.

During the first experiment a year ago, the parachute was torn to shreds as it opened, destroyed by the massive drag generated by super-fast air speeds.

NASA engineers said Tuesday that the parachute in the latest test had fared little better, and ripped apart as it became fully unfurled.

“Preliminary analysis of imagery and other data received during the test indicates the Supersonic Ringsail parachute deployed,” NASA said in a statement.

“The chute began to generate large amounts of drag and a tear appeared in the canopy at about the time it was fully inflated.”

The test involved sending the flying saucer, an inner-tube shaped decelerator and the parachute to an altitude of 120,000 feet over the Pacific Ocean with the help of the giant balloon.

The saucer is called the Low-Density Supersonic Decelerator (LDSD). Rockets lifted the vehicle even higher, to 180,000 feet, pushing it to supersonic speeds.

“The physics involved with LDSD is so cutting-edge we learn something profound every time we test,” Clark said.

“Going into this year’s flight, I wanted to see that the parachute opened further than it did last year before it began to rupture.

“The limited data set we have at present indicates we may not only have gone well down the road to full inflation, but we may have achieved it.”

The new technology is tested at a high altitude because conditions there are similar to the upper atmosphere of Mars.

Since the atmosphere on Mars is so thin, any parachute that helps a heavy, fast-moving spacecraft touchdown needs to be especially strong.