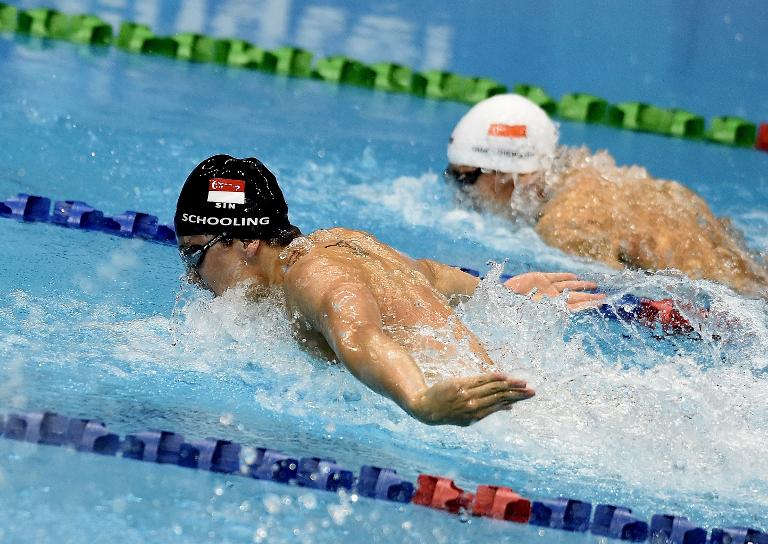 The strong world and Olympic prospect shrugged off the burden of his gruelling schedule as he made it eight wins in four days, and all in event-record time.

Schooling was a whisker off his own Asian record in the 50m butterfly, timing 23.49 sec, and he was just inside the Games mark with 2:00.66 in the 200m individual medley.

The 19-year-old has only Thursday’s 4x100m medley relay left to complete a haul of nine gold medals and head to next month’s world championships in buoyant mood.

“I am pretty tired but I know that I have one more event tomorrow and thatâ€™s the relay so I am going to give it my all and finish the SEA Games with a bang, the way I started it.”

Vietnam’s “Iron Girl” Nguyen Thi Anh Vien stood out once again among the women’s swimmers as she won the 400m freestyle to reach seven gold medals.

Games organisers refused a request to gender-test Indonesian women’s volleyball player Aprilia Manganang, who was booed during her team’s win over the Philippines.

But the 23-year-old, who has previously undergone gender examinations, was defiant, saying she was ready to take more tests and that criticism only made her work harder.

“It became a motivation for me that I shouldnâ€™t give up… It spurred me on to prove them that I am not in the wrong,” she said.

“This time, I think (it’s) my last time in the SEA Games. I hope that I can enjoy it,” said Malaysia’s long-time world number one, who recently returned from a drug ban.

In athletics, the Philippines’ Eric Cray shrugged off an embarrassing wardrobe malfunction when he won his second gold medal in the men’s 400m hurdles.

US-based Cray won the 100m on Tuesday with the flag on his vest upside-down, which officially means the Philippines is at war. His flag was the right way round on Wednesday.

“We don’t make the jerseys so there was nothing we can do about it, but just tell our fellow Filipinos and Filipinas that we are sorry that we didn’t recognise it beforehand and it won’t happen again,” he said.

“I think it was my lucky punch. I am so happy because this is my first SEA Games and I have a gold medal,” said the 19-year-old.

Hosts Singapore powered ahead on the medals table, reaching 60 golds, 12 ahead of Vietnam, late on the Southeast Asian (SEA) Games’ fifth day of full competition.