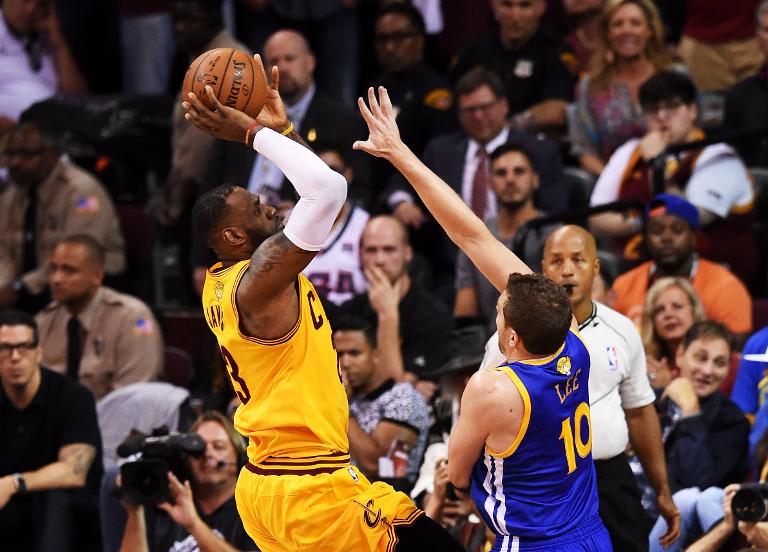 The Cavaliers seized a 2-1 lead in the best-of-seven series with game four Thursday in Cleveland. Teams winning game three after a split have taken the final 84 percent of the time.

Four-time NBA Most Valuable Player James, playing in his fifth consecutive finals, scored 40 points on 14-of-34 shooting while contributing 12 rebounds and eight assists. His 123 points through three games is an NBA Finals record.

“I don’t know if I can continue to produce these kind of numbers, but I’ll keep doing whatever this team needs,” James said. “I’m so outside the box right now. This is a totally different challenge.”

Australian guard Dellavedova added 20 points, 10 of them in the third quarter, and made a crucial 3-point play late in the game to foil Golden State’s comeback after the Warriors rallied from 20 points down to 81-80.

“He’s made of steel,” James said of Dellavedova. “He was huge for us. He gives us that grit we need until the tank is empty. It’s great to have someone like that sacrificing everything.”

Dellavedova experienced severe cramping after the game and received an IV treatment. He did not speak with reporters and was kept overnight at the Cleveland Clinic.

The Cavaliers, who have won 27 of their past 29 home games, seek Cleveland’s first crown in any sport since the 1964 NFL Browns, the longest such US title drought, while the Warriors seek their first title since 1975.

The Warriors, who never led, had an NBA-best seven wins this season after trailing by 15 or more points.

Golden State’s Steph Curry, who scored 27 points on 10-of-20 shooting with 7-of-13 from 3-point range, hit 17 in the fourth quarter. He pulled the Warriors within 81-80 only to have Dellavedova bank in a stumbling shot while being fouled for a 3-point play that sparked an 8-0 Cavs run.

“I didn’t make any shots in the first half,” Curry said. “But whether I’m making shots or not, I’ve got to stay — I’ll use the word vibrant — just kind of having fun out there because the team definitely feeds off my energy and joy for the game. If it’s not going my way I have to find other ways to get us going. It’s going to be a hard-fought series and I’ve got to have a huge part in it.”

Golden State scored 36 points in the fourth quarter but hit only 36 of 90 shots on the night.

Curry praised James and the Cavaliers for defensive work that shut down the NBA’s most prolific scoring club.

“LeBron is making some crazy plays,” Curry said. “They are all just fighting hard and we have to match their intensity, especially to start games. You can’t rely on your comeback abilities every game to win a series like this.”

The Cavaliers, who lost star forward Kevin Love to a separated left shoulder in the opening round of the playoffs and star guard Kyrie Irving in the Finals opener to a fractured left kneecap, had another injury scare when guard Iman Shumpert suffered an early left shoulder injury when hit by a screening Draymond Green. But he returned and played 32 minutes in all.