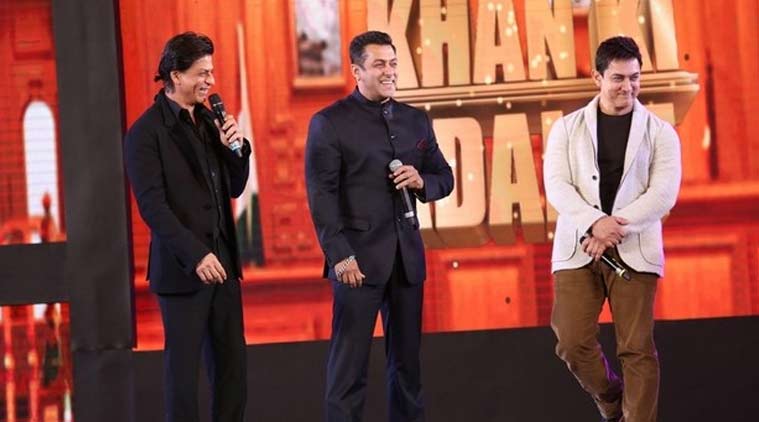 The trio have been mending broken ties: from a hug spree between Shahrukh and Salman to the release of the first look of Salluâ€™s upcoming flick Bajirao Bhaijaan on Twitter, this is absolutely evident.

This gesture of Shahrukh and Aamir went viral and over 6,000 people favourited it, while 5,000 people retweeted it within an hour after the launch of the poster.

The hashtag #BajrangiBhaijaan started trending on top in India. We can only say that all is well if it ends well.

But you must be thinking why I am sharing this now? Is there any particular reason?

Yes, it certainly has and that also a big reason.

Since access to superstars is free, now-a-days, fans are making filthy comments, just to get some attention. But at times they actually cross limits by making some offensive comments.

Now, we also know that Sallu bhai defends his loved one very fiercely. When he saw his fans making unwanted comments on Shahrukh and Aamir, his anger knew no bounds.

The Bhaijaan on Tuesday, expressed his anger in a series of tweets and also warned his Twitter fans, that heâ€™ll be off Twitter if they donâ€™t stop fighting.

He said in his tweets, â€œMessed up fighting over yr heroâ€™s vit each other. make this journey beautiful, dint sign up fr this ugly twitter war n not a part of it . Continue it n I vil b off twitter. Came here to spread love, share sm thoughts hv fun vit fans not for them to insult my fraternity. Hut.â€

â€œSee a lot of love n respect n happy to b here but then thr is a lot of die hard fans who r going wrong in thr thought process competing.â€

â€œHow rich in culture n respect v were. Kya ho gaya yaar. Itni nafrat Pyar mein kyun ? If any 1 who follows me disrespect any of my faternity

I vil not b on this social net work any more. Bus khallas, khatam, wanna follow me n want me to b here to Pyar mohobbat se raho. Or I am out.â€

Have come here so v can grow together b happy n if me n my colleges r creating a darrar between fans then it’s not wort it.

Don’t even need to tweet all this but wanted to so that u understand it’s not cool fr u fans to fight vit each other.

Don’t waste your time on these Â bakwass Â things . not important, important is Â that u r so busy that u don’t have any time for this rubbish.

I wld b the happiest man if u have no time to follow me, b on twitter, reply, etc Â n make your life n b your own hero. Yeh Sab jhoul hai.

don’t waste your time n energy on this stupid negativity or even the compliments, go n make your own life n b happy. Kasaam se

This shows the level of anger the actor was carrying so far. Hope now Sallu Bhaiâ€™s fans understand he wants peace and no war. And his short temperedness is not hidden from anyone. If he says he can quit, he will definitely do it if things didnâ€™t turns out in his favour. Hope this war ends soon and our favourite Sallu Bhai stays on twitter and keeps entertaining us, in his own way.