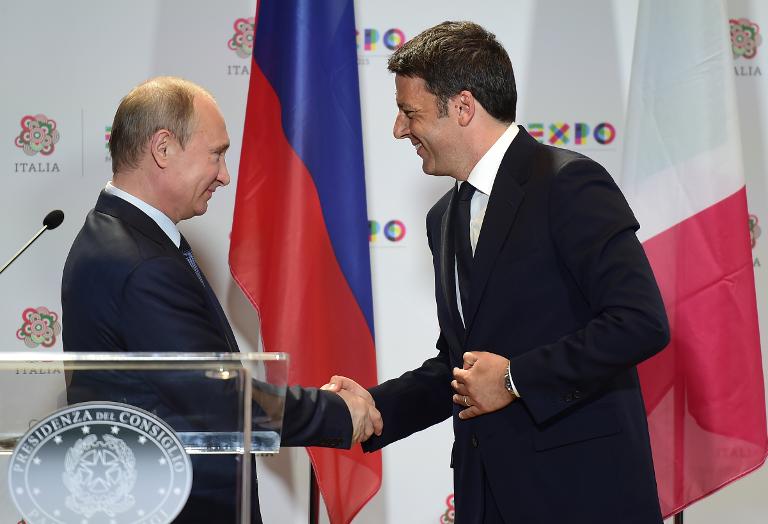 Vladimir Putin took his case against international sanctions to Italy on Wednesday, claiming they would cost Italian companies a billion euros and insisting he was committed to a peaceful resolution of the Ukraine crisis.

Speaking two days after the G7 threatened tougher measures against Moscow, the Russian President told a press conference many agreed contracts had been stalled by the sanctions and may have to be torn up.

“Italian companies missed out on a billion euros,” he said. “They could have given their enterprises work, created jobs. That didn’t happen because of the sanctions.”

Putin also said he was convinced sanctions would not be sustained indefinitely. “I count on the fact that… sooner or later, we will get away from the restrictions that we are encountering today.”

He also took a swipe at the G7 group — Britain, Canada, France, Germany, Italy, Japan and the United States — describing it as “not an organisation, just a club.”

Renzi, one of the club members, struck a conciliatory note by stressing that the world wanted Russia back on board to help resolve problems such as Iraq, Syria and Libya.

Active Russian support for efforts to promote peace in Ukraine would “allow us to push the one element of divergence between us off the table,” Renzi said.

The Italian leader said Putin had agreed that the Minsk agreement governing a shaky ceasefire in Ukraine had to be the “guiding star, the compass, the reference point” for resolving the crisis.

After the talks, Putin headed for Rome, where an audience with Pope Francis is expected to focus on Ukraine amid fears a second ceasefire agreed in Minsk in February is falling apart.

The tough line adopted by the G7 reflected concern about a recent flare-up in fighting in eastern Ukraine, where the West accuses Russia of providing game-changing military support to pro-Moscow rebels who control parts of two Russian-speaking regions.

Ukraine this week said Russian aid had allowed separatist forces in the east to establish a 42,500-strong fighting force.

Putin says any Russians fighting alongside the rebels are volunteers “answering a call of the heart”.

Italy has long had an important economic relationship with Russia and political ties were sufficiently close prior to the eruption of the Ukraine crisis for Russia’s Baltic neighbours to object to an Italian, Federica Mogherini, being named the EU’s foreign policy chief last year amid claims she would be too soft on Moscow.

Italy is Russia’s third-biggest trading partner after China and Germany with deals between the two countries worth just over 30 billion euros ($33.9 billion) last year.

Analysts say Putin’s meetings with Renzi, recently-elected president Sergio Mattarella and the pope will play well to his domestic audience, giving the impression he remains a player on the global stage.

The Vatican has been criticised, notably by the Rome-aligned Greek Catholic minority in Ukraine, for failing to overtly criticise Moscow’s actions in Ukraine.

But the crisis has also stalled a historic rapprochement between the Vatican and the Russian Orthodox church, dashing hopes the Argentinian pontiff could become the first pope to visit Moscow since the 11th Century schism between Eastern and Western Christianity.

After his visit to the Vatican, Putin is expected to call on long-standing friend Silvio Berlusconi, the media tycoon and disgraced former Italian prime minister.

The two men, who have regularly holidayed together, last met in Milan in October, carousing together until 3:00am while Berlusconi was still serving a community service order for tax fraud.