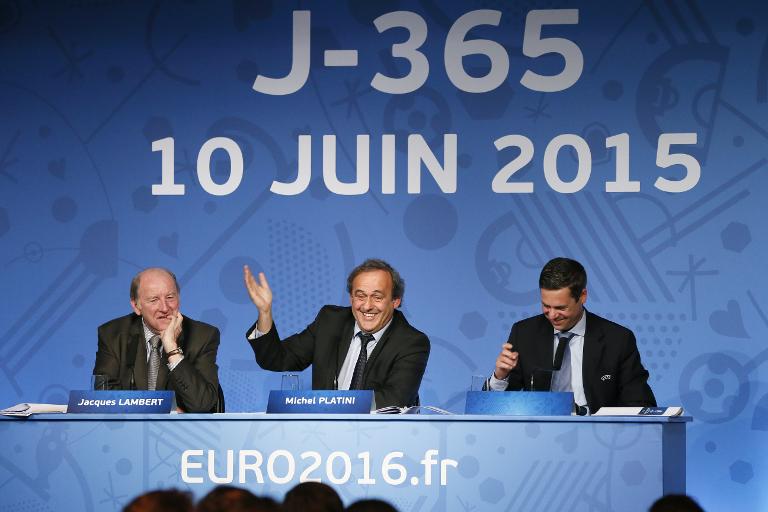 UEFA chief Michel Platini on Wednesday declined any further comment on the scandal engulfing world governing body FIFA and whether he might be a candidate to succeed Sepp Blatter as its president.

Speaking at a news conference called to mark a year to go until the start of Euro 2016, which France is hosting, Platini quickly set the tone.

“Today’s press conference has been scheduled for several months, long before the recent developments within FIFA,” he told journalists.

“Many of you have come here to ask me questions on the FIFA developments and on my personal future plans. I will address these matters one day, but today is not the time nor the place.

“I do not want the news about FIFA to get in the way of news about UEFA.”

Platini is a former ally of Blatter, who announced in Zurich last week that he was standing down after 17 years as head of FIFA amid two probes into corruption at the heart of the Swiss-based organisation.

But Platini later turned against him and was one of the most strident voices calling for Blatter to stand down.

Platini’s name has been mentioned as a possible successor as FIFA president, but he so far has given no indication if he will step forward as a candidate.

Along with the president of the tournament’s organising committee Jacques Lambert, Platini was however prepared to discuss the likely economic consequences of Euro 2016 with France expected to make a significant loss.

According to forecasts, the tournament’s expected total cost of 1.65 billion euros ($1.86 billion, 1.2 billion pounds) will outweight revenues of 1.13 billion euros but Platini insisted that the construction of new stadiums and renovation of existing venues is “a plus for French football.”

New grounds have been built in Lyon, Lille, Bordeaux and Nice while significant renovation work has been carried out in Lens, Saint-Etienne, Marseille and Toulouse.

“One cannot compare the impact of an event that lasts one month with the cost of investment in facilities that are supposed to last for 30 or 40 years,” added Lambert.

With a year to go before the opening match, which will involve France, at the Stade de France, one million tickets went on sale on Wednesday to the general public for a period of one month.

The cheapest tickets, available for just 25 euros, are on sale for 43 of the 51 matches while the most expensive tickets for the final cost 895 euros.

“We want a Euro that is festive and is open to everyone. We are ready to welcome people,” added Platini.

“I want France to win. The country. As for the team…I hope Didier (Deschamps, the France coach) can build a solid defence and then things will be better,” he joked, three days after Les Bleus lost 4-3 to Belgium in a friendly.