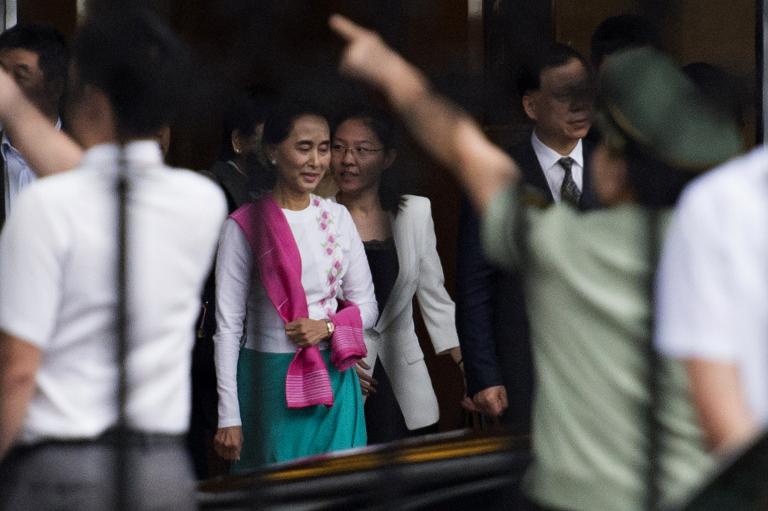 Myanmar opposition leader Aung San Suu Kyi arrived in China Wednesday for a debut visit that will cast an intriguing light on Beijing’s attitude towards the democracy champion and Nobel laureate as she bids to take power.

Suu Kyi emerged from Beijing’s main international airport exit wearing a white top and pink sash and surrounded by police and security, before getting into a black sedan, according to an AFP reporter on the scene.

Beijing was a key backer of Myanmar’s military junta while it was under Western sanctions — most of which have been lifted since 2011 — a much needed international ally for a brutal regime that crushed dissent and kept Suu Kyi under house arrest for more than 15 years.

Now the 69-year-old is visiting China both as a free woman and a politician ahead of crunch elections slated for November at which her National League for Democracy party (NLD) are expected to make significant gains, if the vote is free and fair.

Nicholas Farrelly, a Myanmar specialist at the Australian National University, said the former political prisoner will not allow China’s historical support for a junta that imprisoned her to cloud her judgement.

“Aung San Suu Kyi is getting on with the business of trying to win an election. She will be utterly pragmatic about what is at stake and cannot afford to indulge undue sentiment,” he told AFP.

“She knows that China will play a mighty role in Myanmar’s future.”

The NLD has said she is expected to meet President Xi Jinping and premier Li Keqiang, but no detailed itinerary has yet been released by the Chinese authorities.

An official at the airport from Myanmar’s embassy in China, however, said she would meet Xi on Thursday and would be staying at the Diaoyutai State Guest House.

The delegation’s arrival comes as China’s once near monopolistic relationship with Myanmar faces competition from a raft of new suitors.

Myanmar President Thein Sein has embraced the international community following the lifting of most sanctions and reached out to the United States, which is hankering after friends in Southeast Asia as part of its Asia “pivot”.

Suu Kyi became one of the world’s most famous political prisoners during her house arrest for much of the 1990s and 2000s because of her outspoken opposition to military rule. She was awarded the Nobel Peace Prize in 1991.

But her global image as an upholder of human rights has lost some of its lustre as she has come under criticism for her reluctance to speak out on the plight of Myanmar’s unwanted Rohingya Muslims, who are at the centre of a migrant crisis engulfing the region.

While in Beijing, she will likely face calls to raise the case of jailed fellow Nobel laureate Chinese writer Liu Xiaobo, sentenced to 11 years in prison in 2009 for circulating a petition calling for democratic reforms.

Relations between Beijing and Myanmar have cooled in recent months as an ethnic insurgency in the Kokang region of Myanmar has spilled over its border with China.

Economic issues have also strained the once tight bonds between the two countries, more so as reforms expose the once junta-run nation to protests and the vacillations of public opinion.

Suu Kyi’s NLD party is expected to perform strongly in elections this year but she is unable to stand for president because of a law barring people who have been married to foreigners, as she was before her British husband’s death.

“We hope this visit will boost the mutual understanding and trust between the two parties and press ahead with practical cooperation between China and Myanmar,” foreign ministry spokesman Hong Lei said shortly before her arrival on Wednesday

Also ahead of the visit, an editorial in China’s Global Times took a swipe at Myanmar’s democratic transition, saying reforms had “complicated” its politics.

“The government is rapidly losing control over society,” said the newspaper, which has close links to the Communist Party.

Instead, it offered high hopes for Beijing’s relationship with Suu Kyi, predicting that she would “become a good friend of China” and praising her “pragmatic attitude in disputes concerning Chinese projects”.

In an op-ed on Wednesday in the same paper, international studies professor Bi Shihong said the Chinese Communist Party hopes to build opposition ties ahead of upcoming elections.

“The CPC’s invitation of Suu Kyi means that Beijing eyes further ties with Myanmar in the long-term perspective,” he said.

“By inviting Suu Kyi to visit China, Beijing wants to caution the Myanmar government, especially its hawks, on this matter.”