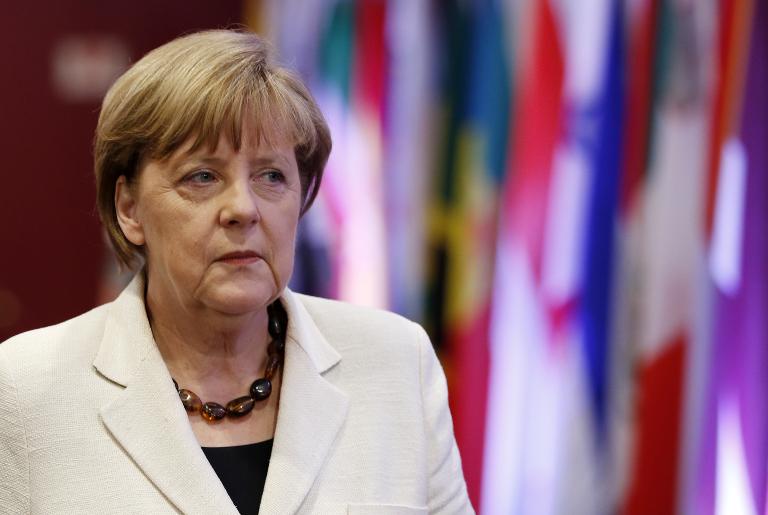 The leaders of Germany and France said Wednesday they were ready to meet Greece’s embattled premier Alexis Tsipras at a summit in Brussels in a last-ditch effort to solve a debt crisis that could send Athens crashing out of the euro.

German Chancellor Angela Merkel said a solution was possible to the Greek debt crisis as she arrived for a summit of EU and Latin American leaders, just hours after the European Commission scathingly rejected Athens’s new bailout reform plan.

There had earlier been doubt about whether a meeting would even take place, adding to the tension as the five-month standoff between Greece and its creditors nears its endgame with the expiry of the bailout at the end of the month.

“The goal is to keep Greece in the eurozone. I always approach these things with the attitude, if there is a will there is a way,” Merkel told reporters as she arrived in Brussels.

Europe’s most powerful leader said she was available to meet the radical leftist Greek premier on the sidelines of the summit as he had earlier requested, and France’s President Francois Hollande said he was willing to do the same.

“Let’s work, go fast and conclude,” Hollande said, as he urged against solutions that “would be bad for Greece, for the European Union and for the eurozone”.

Europe’s leaders were all on their best behaviour for the summit, with European Commission chief Jean-Claude Juncker greeting Tsipras with a bear hug and a kiss despite a recent war of words with the Greek premier.

The day had begun sourly after the Commission — the EU’s executive arm and one of Greece’s three bailout monitors along with the European Central Bank and International Monetary Fund — flatly dismissed the proposals that Athens submitted on Tuesday.

Greece submitted the plan in response to a rival set of proposals that Juncker put forward at a disastrous meeting a week ago.

Greece’s creditors demand tough reforms in exchange for giving Athens the 7.2 billion euros ($8.1 billion) that still remains in its bailout, which expires at the end of June.

Tsipras’s hardline Syriza party was elected in January on the back of its promises to end the “humanitarian crisis” caused by five years of devastating austerity imposed under two international bailouts since 2010.

Rejecting the latest Greek proposals, a spokesman for Juncker said the “ball is clearly in the court of the Greek government”.

“Their latest suggestions do not reflect the state of discussions between President Juncker and Prime Minister Tsipras Wednesday night” and further talks in Brussels this week, spokesman Margaritis Schinas told reporters.

Asked about the state of negotiations as he arrived for the summit, Juncker said: “We will see this in the course of the day.”

Juncker has been a key broker in the Greek talks but his own head-to-head with Tsipras last week in Brussels ended disastrously with the Greek premier dismissing the EU president’s “absurd proposal”.

Any Greek debt deal will still require the approval of the eurozone’s finance ministers, the Eurogroup, which is due to meet in Luxembourg next week.

Without further help Athens could default on huge payments due to the IMF and ECB over the summer, leaving it at risk of a possible messy exit from Europe’s 19-country single currency area.

Last week Greece said it would bundle all of its payments due to the IMF in June, making a total of 1.6 billion euros due at the end of the month, becoming the first country since Zambia in the 1980s to choose that option.

There had been hopes of a breakthrough on the sidelines of Wednesday’s Brussels summit but officials said negotiating teams were still well short of a deal.

Nevertheless, the euro strengthened Wednesday as investors bet Greece was nearing a bailout deal with its international creditors. The 19-nation currency rose to $1.1308 in London trade from $1.1280 in New York.

Tsipras meanwhile used the EU-Latin American summit to have his first meeting with like-minded leaders including Bolivia’s anti-capitalist Evo Morales and Dilma Roussef of Brazil.

The premier also tweeted a picture of a meeting with Hector Timerman, the foreign minister from Argentina, a country that defaulted spectacularly on the IMF in 2001.