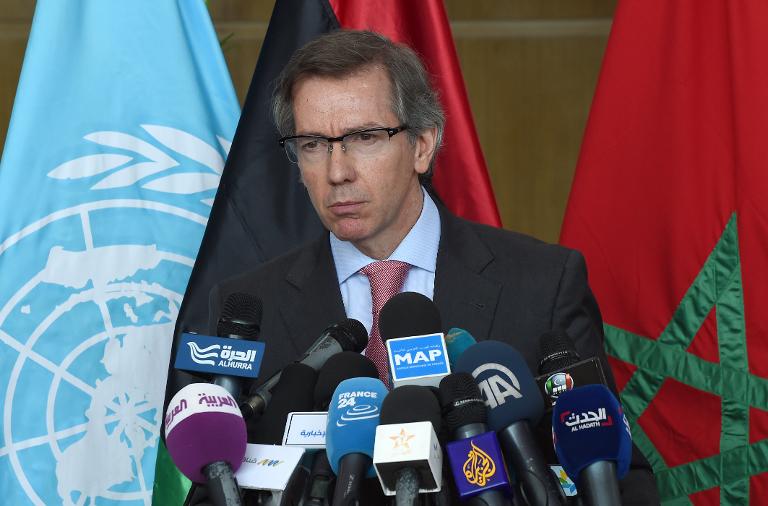 Libya’s internationally recognised parliament is “very unhappy” over a proposed peace deal for the conflict-wracked country, its spokesman said Tuesday, throwing a damper on enthusiasm expressed by the UN envoy.

Libya descended into chaos after a 2011 NATO-backed uprising toppled and killed veteran dictator Moamer Kadhafi, with heavily armed former rebels carving out fiefdoms across the country.

The quest for a deal seeks to prevent the oil-rich and strategic North African nation from crumbling into a failed state.

The shaky security situation was underlined Tuesday with the Islamic State group reportedly saying it had captured Sirte, the Mediterranean hometown of the late dictator Moamer Kadhafi.

Bernardino Leon, chief of the United Nations Support Mission in Libya, said Tuesday warring factions had reacted positively to the draft, as they were said to be heading for talks in Berlin with world powers anxious for an end to the conflict.

But Fradj Abou Hachem, spokesman for the parliament based in the eastern city of Tobruk, said anyone from his delegation who goes to Berlin would be doing so on a personal basis only.

He said parliament was “very unhappy over the draft accord,” particularly the proposal to give wide powers to the rival General National Congress (GNC) in Tripoli, and “we have called the… team home for consultations.”

Leon presented the draft to delegations from the rival sides at talks in Morocco late Monday.

“We have distributed, as you will have seen, a new proposed agreement. All I can tell you for now is that the reaction is positive,” he told journalists.

There was “sense of optimism” emerging from the talks, he said, but warned that no agreement would work without the backing of armed groups.

Leon had spent Tuesday morning shuttling between the negotiators to gauge their response, and mission spokesman Samir Ghattas said the sides would now go to Berlin for talks with European and UN Security Council officials.

Abou Hachem said the proposal over formation of a high council of state was the sticking point.

The 69-article plan provides for the formation of a transitional government of national unity for a period of one year.

It stipulates that the parliament elected last June, most of whose members back the government in Tobruk, should be the legislative authority in the interim.

But the high council of state, most of whose members would be drawn from the GNC, would be able to “express binding opinion with a qualified majority on draft laws”.

Abou Hachem said his side was unhappy with the “prerogatives given to the council”.

Under the proposed deal, the sides would also commit to integrating their militias into a reformed military under direct government control, with former rebel fighters offered the opportunity to join up or be reintegrated into civilian life.

The agreement sets out interim security arrangements for the withdrawal of armed formations from towns and cities and a timetable for disarming.

G7 leaders have thrown their support behind Leon’s efforts to persuade the factions to forge a united administration to replace the rival governments in Tripoli and Tobruk.

After a summit in Germany, the G7 called on Libyan leaders to take “bold political decisions” to end four years of devastating conflict.

It said it would “provide significant support” to help a new government rebuild infrastructure, including restoring public services and strengthening the economy.

Jihadist groups have exploited the lawlessness, which has also prompted a huge influx of migrants trying to make the dangerous crossing to Europe, with shipwrecks leaving hundreds dead and the European Union straining to respond.

Both administrations have been fighting IS loyalists, who have taken several coastal towns to the alarm of an international community fearful of a jihadist foothold on Europe’s doorstep.

IS claimed to have seized full control Tuesday of Sirte from the Fajr Libya militia, the US-based SITE Intelligence Group reported.

SITE quoted a report in which an IS division that calls itself “Tripoli Province” said “soldiers of the caliphate” seized control of the last locations of Fajr Libya gunmen in Sirte.

The report said Sirte would now “be the coastal city linking the east and west of Libya under full control of the Islamic State (group) fighters.”

IS, which controls swathes of Syria and Iraq, has won the loyalty of several Islamist groups in Libya and claimed responsibility for a series of attacks and atrocities, including the killings of dozens of Egyptian and Ethiopian Christians.