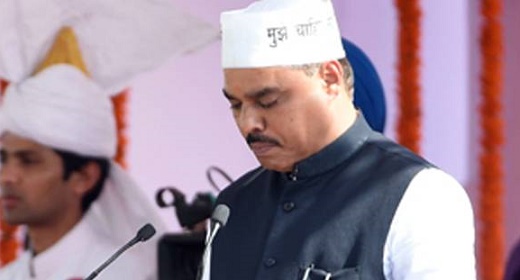 New Delhi/Lucknow: Â A day after his arrest, AAP leader Jitender Singh Tomar was on Wednesday taken to Faizabad in Uttar Pradesh by Delhi Police for questioning in the fake degree case but he maintained that the allegations were false and accused the Centre of a “conspiracy”.

Tomar, who quit as Delhi Law Minister after his arrest on Tuesday, claims to have done his BSc from RML Avadh University, Faizabad. Police are taking him there for an on the spot verification and questioning.

The AAP leader, who was taken to Lucknow by train around midnight en route to Faizabad, maintained that his degree was “genuine”.

“My degree is absolutely genuine. It is a conspiracy by BJP and the central government. Yes, They are not letting AAP government work,” he told reporters this morning at the railway station in Lucknow from where he was being taken to Faizabad by road.

“There is nothing wrong with my degree,” Tomar asserted.

Tomar, an MLA from Trinagar and a first-time minister, was remanded in four-day police custody by a Delhi court on Tuesday.

He was being escorted by an ACP level officer along with seven other personnel to Faizabad.

Delhi Police has claimed that a nearly month-long investigation found that Tomar not only submitted fake science graduation degree and law mark sheets to register with the Bar Council of Delhi but forged a migration certificate also.

Investigators said that an FIR was registered and Tomar was arrested only after finding concrete evidence of his wrongdoing following a complaint by Bar Council of Delhi Secretary Punit Mittal on May 11.Â

49-year-old Tomar, was born on April 12, 1996 in Fatehpur village in the Etah district of Uttar Pradesh. He did his schooling from Delhi and Uttar Pradesh.

In the 2013 Delhi polls, Tomar contested from the Tri Nagar constituency and lost to BJP’s Nand Kishore Garg by a margin that wasÂ a little less than 3000 votes.

However, he defeated the same candidate from the same constituency in the 2015 Delhi polls, but this timeÂ Tomar got wonÂ the seat by a margin of 22,311 votes.

Tomar was initially sworn-in as cabinet minister and was given the portfolios of home, law and justice, tourism, art and culture.

However, the home portfolio was taken away from Tomar in April this year when CM Kejriwal removed him as the state home minister reportedlyÂ because he wasÂ unhappy with the minister not routing some files through the CM’s office.