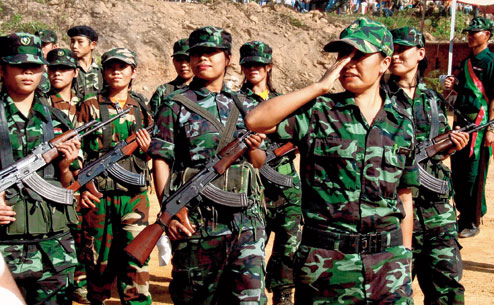 New Delhi: NSCN (K) head SS Khaplang has emerged as the most important leader in the North-East involved in insurgent activities. Â

The Hemi Naga tribesman from Myanmar has edged past the chairman of the region’s biggest outfit â€”RK Meghen of United National Liberation Front (UNLF) of Manipur â€”who is now in Guwahati jail.Â MeghenÂ wanted to become the chairman of the newly floated United Liberation Front of Western South East Asia (UNLFW).Â Â
Â
Intelligence agencies intercepted messages sent byÂ MeghenÂ from Guwahati jail, directing his group not to join the UNLFW if the chairman’s post is not given to him.Â Â
Â
“Khaplang did not agree to this and he went ahead with the formation of the UNLFW onÂ April 17Â with just three other member outfits â€” Ulfa(I), NDFB (S) and KLO â€” besides NSCN(K),” a source said.Â Â

Clan rivalries between the Konyaks of Nagalandâ€™s northernmost Mon district, and the Tangkhul Nagas of Manipurâ€™s Ukhrul district, which dominated the NSCN (IM), is cited as one of the main reasons for the split. The Khaplang faction was formed under the leadership of Khaplang and Konyak leader Khole Konyak.Â

Initially, both groups aimed to create a Greater Nagaland, uniting Naga areas of Nagaland, Manipur, Assam, Arunachal and Myanmar. But in the course of negotiations with India over the past 16 years, the NSCN (IM) is now willing to settle for autonomy of Naga areas. The demands of the Khaplang faction have remained relatively unchanged.Â