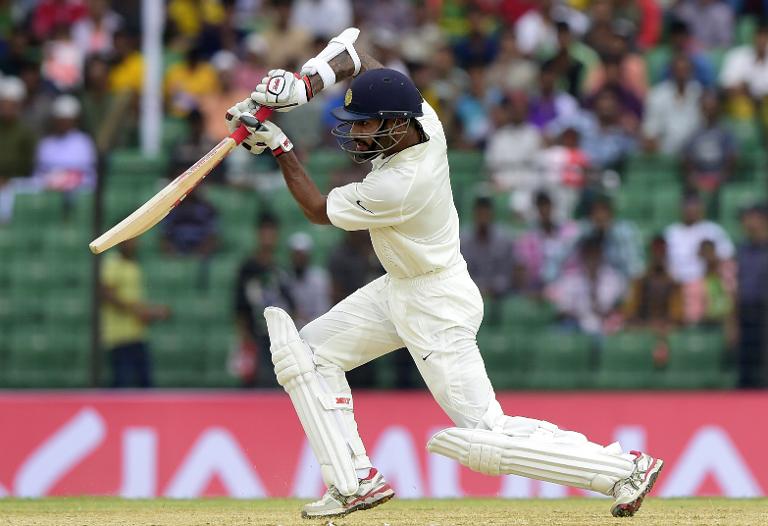 Indian openers Shikhar Dhawan and Murali Vijay flayed Bangladesh’s bowlers with an unbeaten 239-run partnership on the rain-curtailed opening day of the one-off Test match in Fatullah on Wednesday.

Dhawan was unbeaten on a stroke-filled 150 off 158 balls and Vijay was on a more sedate 89 after their captain Virat Kohli won the toss on the easy-paced wicket at the Khan Shaheb Osman Ali stadium.

Left-hander Dhawan, who had been dropped for India’s previous Test against Australia in Sydney in January, marked his comeback with 21 boundaries in his third century.

Vijay, lucky to survive a leg-before appeal before he had scored, proved the perfect foil at the other end as Bangladesh employed seven bowlers to try to break the partnership.

Just 56 of the stipulated 90 overs were bowled during the day as rain, which arrived 25 minutes before lunch, washed out the entire post-lunch session.

Floodlights had to be switched on in the morning session to allow play to take place as threatening dark clouds loomed overhead.

Indian spinner Ravichandran Ashwin said the tourists were not fretting about the forecast of uncertain weather for all five days.

“Cricket is a game where even if you look to control the controllables, it is sometimes hard,” said Ashwin. “We canâ€™t really control the weather because that is out of our reach.

“But if we put our best foot forward and the time is there, and if we bowl really well, we can enforce a result. Weâ€™d just like to control the controllables.”

Dhawan and Vijay attacked the four-pronged spin attack on either side of the interruption to compile their second 200-plus stand after their 289-run effort against Australia in 2013.

Vijay brought up the double-century partnership with a six off leg-spinner Jubair Hossain, but it was Dhawan who dominated the stand with attractive strokes all round the wicket.

Dhawan raced to 74 off 71 balls, but the untimely rain interruption denied him a chance to attempt a century before lunch.

The left-hander was on 73 when he mistimed a shot off left-arm spinner Taijul Islam, but Shuvagata Hom failed to grasp a difficult chance at short mid-wicket after getting his hands on the ball.

When play resumed after tea, Dhawan was stranded on 98 for seven deliveries before pulling Jubair for a boundary to bring up his third Test century.

The hosts’ gameplan to play four spinners meant Mohammad Shahid was the lone seamer in the side, with part-timer Soumya Sarkar sharing the new ball.

Taijul was the most expensive bowler, conceding 55 runs in his 12 overs, while Jubair went for 41 runs in his seven.

Bangladesh coach Chandika Hathurusinghe insisted his team should not be written off after just one day’s play.

“We still want to win, we are still playing to win,” the former Sri Lankan batsman said. “In cricket anything can happen. Until both sides have batted once, it is not right to judge a game.

“On a wicket like this, it is always a big advantage to win the toss, bat and put up a big total. They may have got off to a good start but we can still win the game provided we bowl well tomorrow.”

Bangladesh captain Mushfiqur Rahim, who is recovering from a finger injury, took the field as a specialist batsman, with debutant Litton Das taking over wicket-keeping duties.