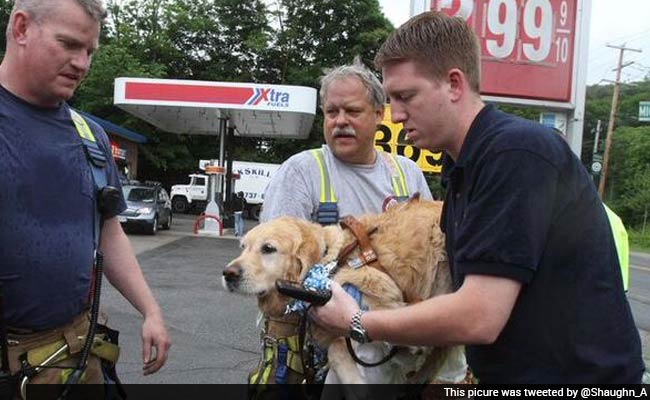 New York: A brave guide dog in New York jumped in front of a fast moving school bus to save its visually impaired woman owner from being hit, fracturing its leg in the process.

Figo, a golden retriever, is being praised by the people for its heroic act, underwent a surgery following the incident and is recovering in New York’s Putnam County.

Figo and Ms Stone were out for a walk when Figo saw a school minibus barrelling toward them, police said. The dog threw itself at the closest part of the bus.

The dog will stay at the vet’s until Ms Stone is ready to go home. Figo’s leg was cut to the bone.

The bus driver, who had two kindergarten students on board, did not see the pair crossing the road, police said. No one on the bus was injured. The driver was cited for failing to yield to a pedestrian.

Paul Schwartz, who works at a nearby gas station and convenience store, came running when he saw the crash. Figo kept trying limp toward his owner, Mr Schwartz said. And Ms Stone kept calling for her dog.

“He let us wrap up his leg without any problem,” Mr Schwartz told the paper. “He wasn’t barking or crying or yelping. But he kept pulling toward her.”

Firefighters put Figo in a truck and took him to a vet. News crews visited him afterward.