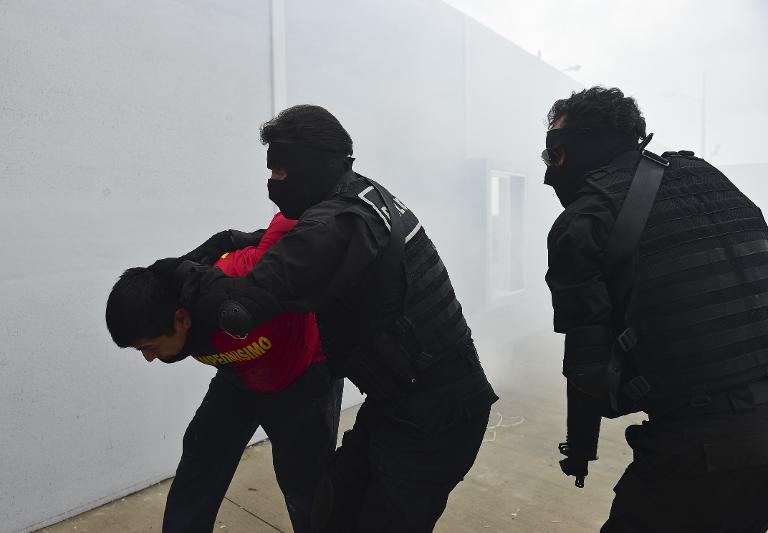 The mock village perched on a hill in central Mexico looks like a Hollywood set, with a main square surrounded by a hollow town hall, a church and a school.

At the petrol station, a heated argument between two men in a pick-up truck ends with one shooting the other dead, followed by a fiery explosion in the back of the vehicle.

Officers wielding fake assault rifles swoop in, tackle a suspect near a gazebo and handcuff another inside a supermarket. Crime scene investigators arrive to collect evidence.

But the officers are not actors on a film set. They are actual police officers in training.

Welcome to the US-funded police academy in Amozoc de Mota, Puebla state, home to the “tactical village”, one of a handful in Mexico where federal, municipal and state officers are getting much-needed training.

The three-year-old, state-of-the-art facility is a key part of US-Mexican efforts to transform the country’s much-maligned police forces, which have battled allegations of brutality and collusion with drug cartels.

“We have effective police officers, but we also have bad police. It’s irritating because we have people who do their work properly,” said Ricardo Escamilla Montes, 34, an officer from the central city of Celaya on a two-week course.

The academy has trained more than 16,000 agents from the country’s 32 states since opening in May 2012, with $17 million spent by Puebla state and $5 million by the United States.

It is part of the $2.3 billion Washington has earmarked for training and equipment since the two countries signed the Merida Initiative against organized crime in 2008.

Wearing a white forensic investigator’s suit, Escamilla learned how to properly collect evidence during the murder drill on a cloudy weekday.

“Don’t stand too close to the body,” the instructor said as Escamilla dabbed the truck’s door for fingerprints and another officer photographed bullet casings.

They need this knowledge as Mexico continues to switch from an opaque trial system based on paperwork to US-style oral arguments in open court.

Municipal police were previously limited to cordoning off crime scenes while waiting for state or federal detectives.

“I do feel like we lack a lot of training,” said Jose Manuel Gonzalez, 41, an officer from Ajalpan, Puebla, on a two-week mid-level commander training course.

“I’ve come here to learn, return to my municipality and share my knowledge,” he said after assisting an instructor in a crime scene house, where real semen was scattered on bathroom walls for students to find in the dark with a UV light.

Maria del Carmen Castaneira, an instructor with 20 years of experience as a Puebla investigator, said it once took her eight hours to reach a remote crime scene, a delay that can compromise evidence.

“Investigators are having some problems and in many cases, oral trials are being lost,” Castaneira said.

Despite efforts to build up security forces, authorities are struggling to gain trust.

While officials say superior training and equipment explains how police killed 42 criminals while losing only one officer in a gunfight on May 22, the governmental human rights commission is investigating whether abuses were committed.

In another case that outraged Mexicans, prosecutors say local police in Guerrero state colluded with a drug gang that allegedly killed 43 college students in September 2014.

“Simply because of some bad events, does that mean what we’ve done is a waste? By no means,” said Richard Glenn, deputy director of the US embassy’s International Narcotics and Law Enforcement Section, which oversees training projects.

Mexico is taking the right steps, with improvements seen in places like Morelos state, where US-trained anti-kidnapping units have made progress, US officials said.

However, Glenn told AFP, “The broader change that everybody is looking for, that will be seen over the course of 10, 20, 30 years.”

Darrel Paskett, US coordinator of the Mexican police professionalization program, said the tactical village teaches officers “the appropriate use of those tactics so that they’re protecting the community rather than endangering the community.”

But, Paskett said, the effort also includes vetting officers to remove the bad ones and providing financial and professional incentives.

The police academy is home to a “trust control center” where every year, 12,000 aspiring and current officers undergo psychological, drug and lie-detector tests.

Half of the candidates pass while one in five working officers fail, said the academy’s dean, Maria de Lourdes Rosales Martinez.

Close to the academy, a San Pedro Cholula police commander was accused in May of killing a young man. While his force trained at the academy, Rosales Martinez did not know if the officer participated.

“This is why training must be a permanent process,” she said.