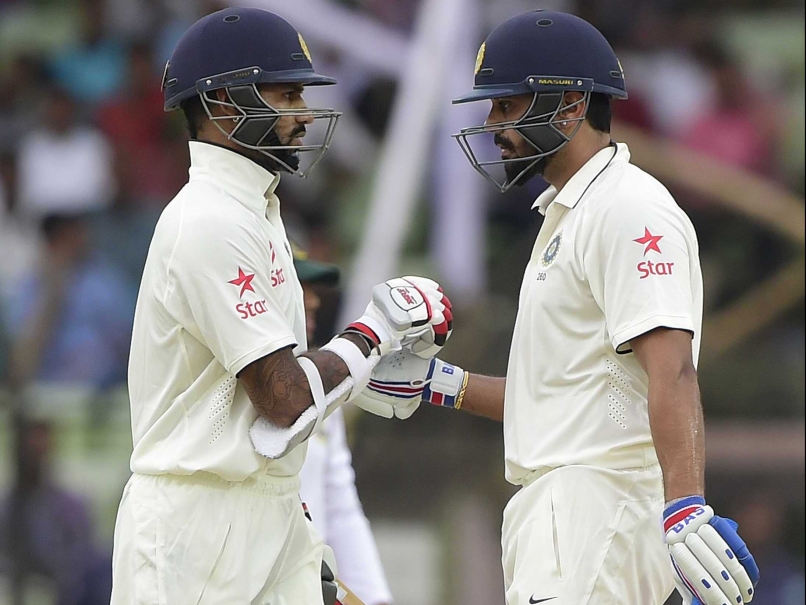 Dhaka: Shikhar Dhawan made an explosive comeback to Test cricket with an unbeaten 150 and his opening partner Murali Vijay remained not out on 89 as India romped to 239/0 on Day 1 of the one-off Test against Bangladesh at Fatullah.

In mere 23.3 overs the opening pair managed to put 107-runs on the board when rain interrupted the play.

Opener Dhawan made a strong comeback to score his third Test century and guided India to a good score before rain forced early lunch. His partner Vijay was also on the verge of scoring a century after a slightly shaky start.

On a perfect batting track at Fatullah’s Khan Shaheb Osman Ali Stadium, left-handed Dhawan and right-handed Vijay barely broke a sweat against the home team’s limited bowling resources to score at a brisk rate and lay the foundation for a big total.

The left-right opening combination presented a contrasting batting approach with Vijay looking tentative while Dhawan, dropped from the Sydney Test against Australia in January, was at his fluent best.

The 29-year-old southpaw peppered the boundaries on both the sides with some crisp drives and hit 12 fours in his 71-ball stay in the first session.

India also welcomed back 34-year-old Harbhajan Singh to international cricket with the off-spinner having last played for the country in a Test match in March, 2013 against Australia.

Earlier, skipper Virat Kohli had no hesitation in opting to bat first after winning the toss and went in with an extra bowler for the match.

Bangladesh, who impressed in the home series against Pakistan recently, handed a debut to Litton Das as captain Mushfiqur Rahim will not keep wickets due to a finger injury.