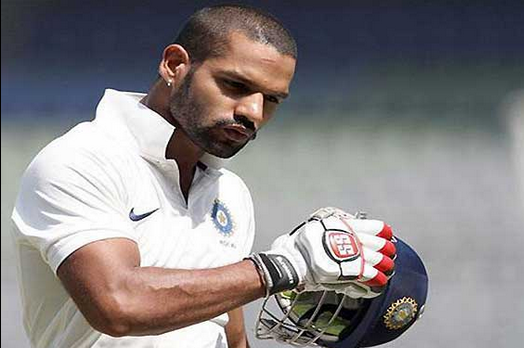 Fatullah:Â Opener Shikhar Dhawan’s attractive strokeplay vindicated skipper Virat Kohli’s decision of opting to bat asÂ Indiacomfortably reached 107 for no loss when early lunch was taken due to rain on the first day of their one-off cricket Test against Bangladesh, in Fatullah on Wednesday.Â

Coming back into the playing XI after being dropped during India’s last Test match at Sydney, the left-hander made full use of the opportunity treating the home bowlers with utter disdain during his undefeated knock of 74 off 71 balls.Â

Dhawan’s innings had 12 sweetly-timed boundaries while Vijay was an ideal foil with a patient unbeaten 33 off 70 balls with four boundaries.Â

Just before the rain interruption in the 24th over, Dhawan got a reprieve when Shuvagata Hom dropped a relatively easy catch at short mid-wicket off left-arm spinner Taijul Islam’s bowling. The southpaw was on 73 at that time.Â

The home team’s decision to play with four specialist spinners and a single seamer backfired badly as Dhawan toyed with the bowling. While the short balls from seamer Mohammed Shahid were pulled, the width given by spinners like Shuvagata were cut with a lot of ferocity.Â

The first boundary of the innings came in the fourth over bowled by Sarkar as Dhawan played a flowing cover drive. Dhawan followed the shot with an off-drive off Mohammed Shahid.Â

When off-spinner Shuvagata Hom was introduced, the Delhi left-hander hit back-to-back boundaries — first played a cut shot and then played a straight drive.Â

Having got into the flow, Dhawan rocked back and forcefully cut Shahid past point and then pulled him for good measure to race into the 30s. There was another poor short ball which made Dhawan just rock back and hit past square leg.Â

With speed in late 120 kmphs, Shahid, after his first two overs, could not hit the desired length as it became cannon fodder for the attacking left-hander. As Dhawan started carting theÂ Bangladeshattack, Vijay played the perfect second fiddle at the other end.Â

Dhawan reached his third Test fifty when he played a deft late cut off Shuvagata to complete the mini landmark off 47 balls as skipper Virat Kohli and Team Director Ravi Shastri were seen applauding his effort.Â

Bangladesh’s premier spinner Shakib didn’t look penetrative during his first spell as there were a number of loose balls including a loopy full toss that Vijay dispatched to the boundary.