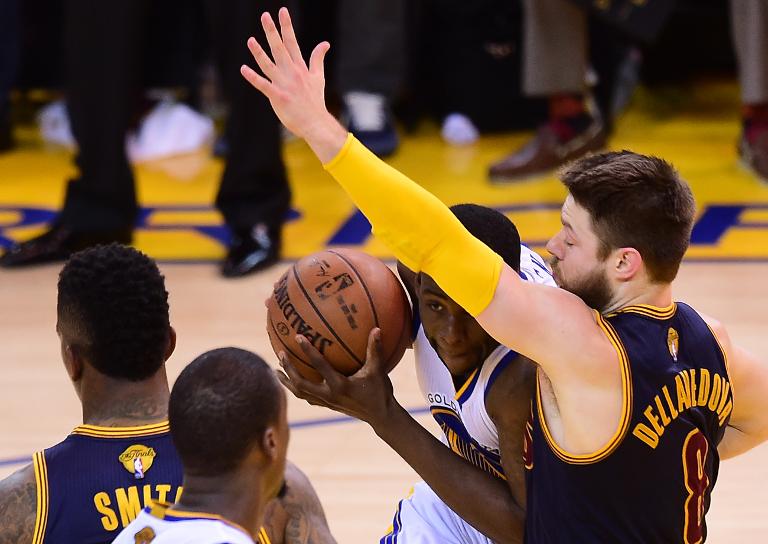 At the rate their players are suffering injuries, the Cleveland Cavaliers might be accepting the NBA championship trophy in their hospital beds.

Already hit by two stars lost to playoff injuries, the Cavaliers had more health concerns Tuesday after a 96-91 victory over Golden State that gave Cleveland a 2-1 lead in the best-of-seven title series. Game four will be Thursday in Cleveland.

Australian guard Matthew Dellavedova scored 20 points, including a pivotal 3-point play on a stumbling bank shot while being fouled late in the fourth quarter.

But he needed an IV drip after the game and was taken to the Cleveland Clinic, unable to talk with reporters about his heroic night, which also included five rebounds and four assists over 39 minutes.

“He plays as hard as he can every day. He’s not afraid. He plays courageously. And everybody on this team has his back,” Cavaliers coach David Blatt said. “He’s going to give you everything he has. What’s not to love about the guy?”

And guard Iman Shumpert suffered a left shoulder injury in the first quarter when he ran into a screen set by Golden State’s Draymond Green.

The painful injury, in the same area as one that benched him for six weeks during the season, sent Shumpert to the locker room but he returned in the second quarter and played 32 minutes in all.

“Guys set screens and you usually go shoulder to shoulder a lot, and that time it hurt a little bit more than usual,” Shumpert said. “I was able to play (later) so I’m happy about that.”

The Cavaliers are already without star forward Kevin Love, who suffered a separated left shoulder in the first playoff round, and star guard Kyrie Irving, who suffered a fractured left kneecap in the finals opener.

James is averaging a record 41 points, 12 rebounds and 8.3 steals a game in the finals. Even he appeared to be cramping at the end of the contest, but he was more concerned with praising Dellavedova.

“He’s going to give everything he’s got. He’s going to throw his body all over the place. And he’s going to compete at a high level however many minutes he’s out on the floor,” James said. “It was great to have someone like that willing to sacrifice everything for the team.”

Cavaliers coach Blatt says fan favorite Dellavedova is “the most Cleveland-like Australian I’ve ever met in my life. Guys love Delly because he just plays with all his heart and he cares first about the team.”

And he recognized how many vital minutes Shumpert played so the Cavs did not have to dig deeper into a depleted bench.

“Very, very, very tough. I don’t know a lot of guys that come back in the game,” Blatt said. He’ll be examined. But he was in some pain and he was hurting. Not a lot of guys come back out of the locker room and play the way he did and my hat is off to him.”

In a campaign of setbacks, which also included the loss of Brazilian big man Anderson Varejao to a torn Achilles tendon last December, the Cavaliers have persevered.

“This is a resilient group. They just don’t give in. If you can bend and not break, you’ve always got a chance,” Blatt said. “We may bend sometimes, but we haven’t broken. Lot of character in that room and they are bringing it to the floor.”

“He will leave it all on the floor, dives on the floor every single play, gets cut in the face, elbowed, scratched and keeps on fighting,” Shumpert said. “He’s a great teammate to have.”