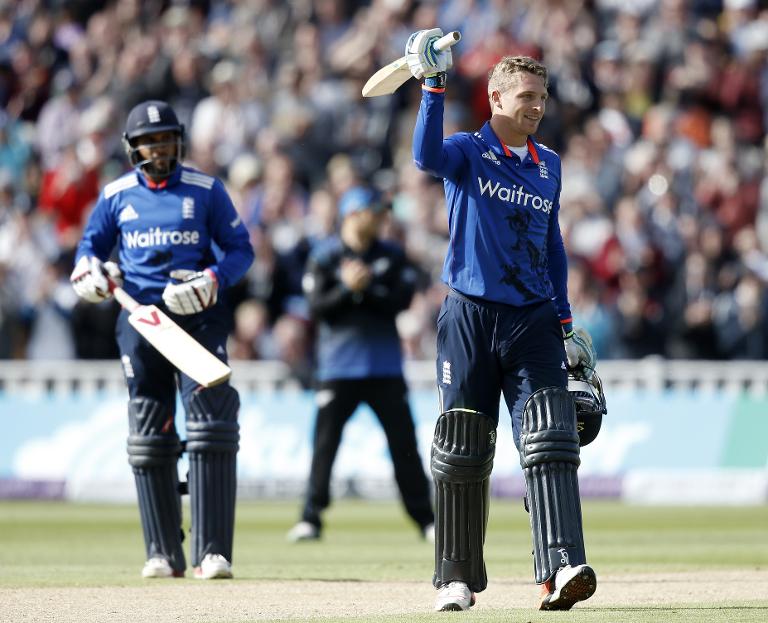 Jos Buttler said AB de Villiers was his “role model” but insisted he’d a long way to go to match the standards of the South African star despite a dazzling hundred against New Zealand at Edgbaston on Tuesday.

Buttler’s thrilling century off just 66 balls, which followed an almost as quick 71-ball ton from Joe Root, allowed England to post a mammoth score of 408 for nine in the first of a five-match one-day series with the Black Caps.

It was the first time England had passed 400 in ODI cricket, while their eventual 210-run winning margin was another national record.

England were in danger of undoing all their good early work at 202 for six but Buttler and Adil Rashid (69) belied the team’s reputation for conservative one-day cricket during a stunning partnership of 177 — a seventh-wicket record in all ODIs.

Buttler’s ‘360 degree’ approach to batting has invited comparisons with Proteas maestro de Villiers, but the 24-year-old wicket-keeper/batsman told reporters: “I’m not sure I’m quite at those guys’ level yet.

“AB de Villiers is someone who has been a role model for me for a long period of time — someone who has changed batting, I think, over the past few years — and everyone is trying to emulate him.

“That’s the role I want to play in English cricket.

“I want to be that guy who can go out like I did and play those kind of innings and try to do that consistently,” added Buttler, now the vice-captain of England’s one-day side.

What made England’s display at Edgbaston all the more extraordinary was that it was in complete contrast to their eight-wicket defeat by the eventual World Cup finalists when they last played New Zealand in white-ball cricket at Wellington in February.

England suffered a humiliating first-round exit at the global showpiece tournament and one-day skipper Eoin Morgan vowed afterwards they would opt for a more dynamic approach to the 50-over game.

But few expected England to make good on his words as soon as the opening match of the New Zealand one-day series.

However, Buttler insisted no absence of effort had held England back at the World Cup, but rather they had suffered a loss of confidence allied to questionable tactics.

“It wasn’t through lack of trying before — it’s not as if we wanted to play (like) that,” said Lancashire gloveman Buttler.

But Buttler said England’s fans had to accept there would be days when the kind of bold approach on display at Edgbaston might not pay off.

“I hit a couple through the slips — and if those chances are taken, we could potentially have been all out for 250,” he explained.

The next World Cup will be staged in England in 2019 and Buttler warned against placing too much emphasis on one result, however impressive.

“We don’t want to get carried away at one performance and think English ODI cricket is fixed and we’re going to win the World Cup,” he said.

“Throughout my career, that is the way I enjoy playing cricket,” he said. “My method is to score as many as I can as quick as I can.

The England-New Zealand series continues at The Oval on Friday.