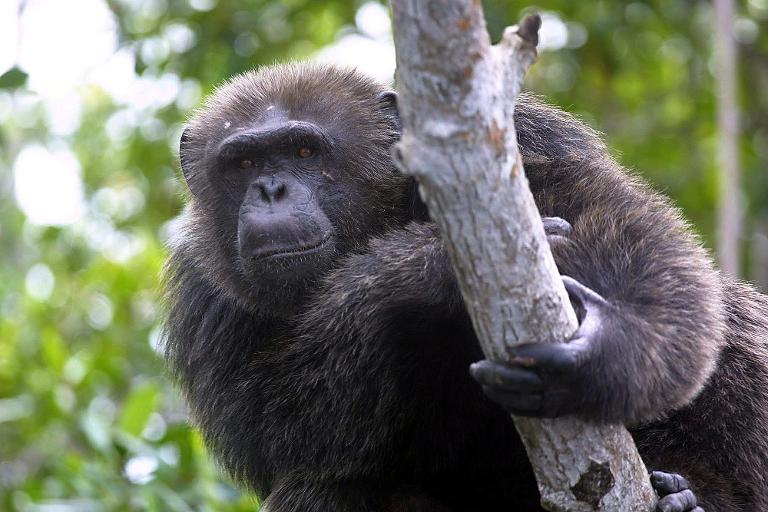 Chimps in the west African country of Guinea discovered a free treat in raffia palms tapped by local people to extract a sweet, milky sap which then ferments into an alcoholic drink.

The apes scrunched up leaves in their mouths, moulding them into spongy pads that they then dipped into the sap-gathering container, which villagers attach to the tree near its crown.

Tests showed that the beverage’s alcoholic content varied from 3.1 percent to a whopping 6.9 percent, the equivalent of strong beer.

Some of the chimps went a little, well, ape.

“Researchers rarely collected detailed behavioural data before versus after exposure to ethanol, but some drinkers rested directly after imbibing fermented sap.”

The chimps are part of a closely-observed colony at Bossou in southern Guinea.

In 2008, one of the animals made the headlines when he was found to use a stick to “fish” for ants — an important discovery in the use of tools by our primate cousins.

Cases of animals ingesting alcohol are not exceptional. They include Swedish moose that get drunk on fermented apples, and monkeys on the Caribbean island of St. Kitts that sneak gulps from vacationers’ cocktails (https://www.youtube.com/watch?v=pmnzIhbX2bg).

But the Bossou chimps, observed over 17 years, are the first to provide serious data about how much alcohol can be knocked back in the wild, and when.

Sometimes, just a single chimp would go to the top of the palm, the researchers found.

But on occasions, there would be “drinking sessions” when several chums would gather in the crown of the tree.

“Individuals either co-drank, with drinkers alternating dips of their leaf-sponges into the fermented palm sap, or one individual monopolised the container, whereas others waited their turn.”

Over the 17 years, the researchers recorded 51 drinking events, 20 of which were “drinking sessions.” They identified 13 adult and young chimps.

The cheeky animals made their sponges from leaves that villages had placed over the top of the containers to prevent dust and insects from contaminating the sap.

The findings back the so-called “drunken monkey” theory — that apes and humans share a genetic ability to break down alcohol that was handed down from a common ancestor.

By metabolising alcohol, according to this idea, our forerunners could eat fermented fruit found on the forest floor, gaining a precious additional source of calories and vitamins.