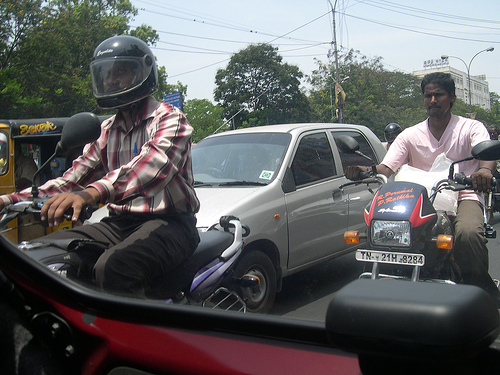 New Delhi:Â Two-wheeler riders inÂ Tamil NaduÂ must wear helmets from July 1 or risk impounding of their driving license, according to a Madras HighÂ CourtÂ order.Â

Observing that it was disheartening to note that a number of precious lives are lost due to non-wearing of protective headgear, the Madras High Court today made it clear that wearing of helmets by two-wheeler riders is a must and documents including driving license must be impounded in case of failure to do so.Â

Justice N. Kirubakaran directed the central government, besides the Secretary, Surface Transport Ministry, to direct all states to monitor the compulsory wearing of helmets and take action.Â
The judge, who allowed a Civil Miscellaneous appeal, directed the Home Secretary and the Director General of Police, Tamil Nadu, to announce through the media that wearing of helmet by two-wheeler riders was compulsory from July 1.Â

The judge observed that it was disheartening to note that a number of precious lives were lost due to non-wearing of protective headgear as mandated under section 129 of Motor Vehicles Act 1988.Â

Justice Kirubakaran said neither the authorities act as per the statute nor follow directions issued in this regard.Â

The order was passed by the judge while allowing the appeal filed by the legal heirs of N Kumar, a building demolition work contractor on May 2, 2011 who died in an accident while riding his two wheeler here.Â

The Motor Accident Claims Tribunal awarded an amount of Rs 12,23,100 towards compensation but not satisfied, the legal heirs filed the appeal.Â

Enhancing the compensation from Rs 12.23 lakh to Rs 20 lakh, the judge directed authorities to inform the public through the media on or before June 18 that wearing of helmet by two-wheeler riders was mandatory, adding, documents, including driving license, would be impounded in case of failure to do so.Â

The judge said impounded documents would be released on showing the receipt of purchase of a helmet with ISI certificate.Â

The court directed the central government to go into the details of the design of the helmets to provide clear visibility for the wearer of helmet.Â

It further directed the Home Secretary and the Tamil Nadu DGP to instal CCTV cameras at important junctions and roads, including national highways, to monitor wearing of helmet by two-wheeler riders. Those who fail to wear helmets have to be issued notice and license cancelled after inquiry, it added.