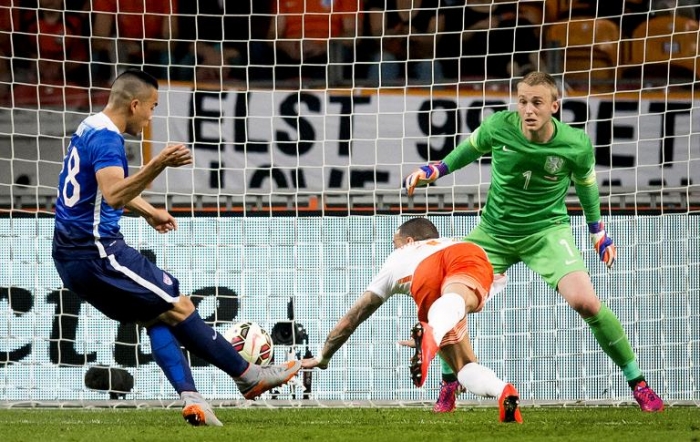 The USA are out to claim another major European scalp in Wednesday’s friendly against world champions Germany when the Stars and Stripes’ head coach Jurgen Klinsmann faces his old team.

An inexperienced USA side stunned the Netherlands with a dramatic 4-3 victory in Amsterdam last Friday with two goals in the final minutes.

Next up are Germany in Cologne with Joachim Loew’s side resting many of his stars who won the World Cup in what is a warm-up for Saturday’s Euro 2016 qualifier against Gibraltar in Faro, Portugal.

The USA begin their defence of the Gold Cup next month as they take on Honduras, Haiti and Panama in Group A, but beating Germany after downing the Dutch would be a significant boost.

Klinsmann described the Dutch win as a “huge learning curve” for his inexperienced side to know they could “play at that tempo” against high-profile opponents and they have nothing to lose against Germany.

“I just expect it to be fun to play against the world champions. Who else do you want?” said Klinsmann, who coached Germany to third place at the 2006 World Cup they hosted with Loew as his assistant.

“Obviously it’s my home country too and my former assistant coach took them to the World Cup title. So it’s going to be a special day.

“Playing against top teams like Germany and the Netherlands provides valuable experience, especially for the younger players here.

“More and more, they must understand we come to meet these opponents eye to eye.

“Obviously itâ€™s a bit tricky when we are without some of our core players, but that creates a huge opportunity for the guys here to benchmark themselves against some of the best players in the world,” added Klinsmann.

Loew has included the likes of midfield star and captain Bastian Schweinsteiger, plus Mario Goetze, who scored the winner in the Brazil 2014 final.

Germany beat the USA 1-0 in their World Cup group stage match in Brazil last year as Loew’s side avenged their shock 4-3 friendly defeat to Klinsmann’s USA in Washington in 2013.

“Playing against Jurgen Klinsmann, is always something special for us,” said Germany manager Oliver Bierhoff.

“We want to play attractive football against the Americans in a great atmosphere.

“I’m pleased to see Jurgen again, because had a big influence on the current team.”

Loew will be without Borussia Dortmund’s Mats Hummels and Bayern Munich’s Jerome Boateng against the USA as Hummels is injured, while Boateng will only be available for the Gibraltar qualifier.

Borussia Moenchengladbach winger Patrick Herrmann is set to make his debut while Loew has included 13 of his squad which won the World Cup.