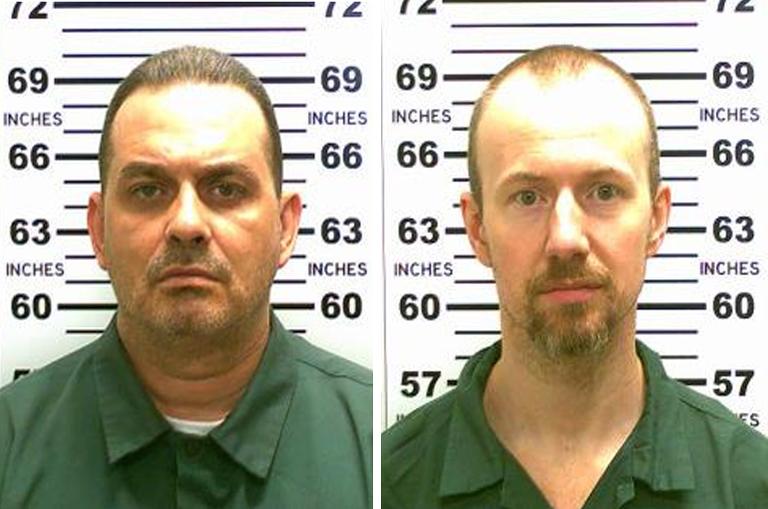 A US manhunt for two convicted killers who cut their way out of a maximum security jail Hollywood-style on Tuesday stretched into a fourth day as investigators focused on whether they were helped by prison staff.

Richard Matt, 49, and David Sweat, 35, used power tools to cut through walls at the Clinton Correctional Facility in the small town of Dannemora in New York state before dawn on Saturday.

They crawled to freedom through an underground pipe system, coming up through a manhole and leaving behind a taunting note saying “Have a Nice Day” next to a toothy grin.

Police backed by sniffer dogs and helicopters have scoured the area, setting up roadblocks and alerting officials on the Mexican and Canadian borders, but there has been no trace of the two men.

Local schools were on heightened state of alert but officials admit the felons could be anywhere.

“They are truly dangerous, desperate men,” New York Governor Andrew Cuomo said, adding that he believed they had help, “primarily from the inside.”

“You have three types of employees at a prison. You have the guards, civilian employees and private contractors who come in to do work,” he told NBC television on Monday.

“We are going through the civilian employees and the private contractors first. I’d be shocked if a corrections guard was involved in this but … they couldn’t have done this on their own.”

US media reported that a female prison worker was questioned by police and removed from her post in connection with the investigation. State police refused to comment on the reports.

The New York Post said the worker may have been wooed by Matt, whom the paper described as “an infamous lady killer.”

There is a $100,000 reward for information leading to their arrest and a new tip line for members of the public to call.

“Even from the equipment point of view. It took days to accomplish this. It really could have been a movie script,” said Cuomo.

American newspapers have compared it to Hollywood prison movies like the “The Shawshank Redemption” and “Escape from Alcatraz.”

Beau Duffy, a state police spokesman, told AFP that officers were chasing about 300 leads but refused to give further details.

More than 250 officers were involved in the search in the immediate area, including uniformed state police and the FBI.

“If you figure, a prisoner is not too smart if he’s going to hang around here. You know they’d go further out somewhere,” local resident Chris Bulluck told local TV channel WPTZ at the weekend.

The prisoners, who lived in adjoining cells, drilled through walls and pipes and left behind clothing in their beds as decoys to make it appear they were still in their cells, officials said.

Police with bulletproof vests and rifles manned roadblocks to and from Dannemora, a community of some 1,700 people near the Canadian border.

No one had previously escaped from the maximum security portion of the prison, which dates back to 1845 and where construction work was ongoing at the time.

About 3,000 inmates live at the prison, according to its website.

Matt and Sweat were found missing during a 5:30 am bed check on Saturday, according to police.

After cutting through their cell walls, they reportedly clambered along a six-foot (1.8-meter) high catwalk to access a twisting series of pipes and tunnels, through which they also cut their way.

Matt, who is six feet tall and has multiple tattoos — including a Marine Corps insignia on his right shoulder — was incarcerated for 25 years to life for kidnapping a man and beating him to death.

He also has tattoos on his back with the words “Mexico Forever.”

Sweat, who has tattoos on his left bicep and his right fingers, was serving a sentence of life without parole for killing a sheriff’s deputy.